In email correspondence with a couple of people who plan to attend the Malcolm Campbell High School Sixties Reunion in Toronto on October 17, 2015, we’ve occasionally talked about how people ended up living in Montreal during their childhood and adolescence. Occasionally, people have stayed in Montreal all of their lives. I didn’t have the latter experience but I find it really interesting to speak with MCHS graduates who are in the latter demographic category.

It’s always interesting to consider all the steps whereby various people ended up in Montreal and in time at Malcolm Campbell High School. 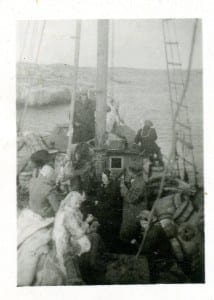 Part of my extended family, including my parents and brother (2 and a half years older than I am) escaped across the Baltic Sea in 1944 at the time of the second Soviet occupation of the Baltic states of Latvia, Lithuania, and Estonia. I was born in Sweden after the end of the Second World War.

Much was lived through during those times, not just in Estonia but across Europe and elsewhere. Many close calls, many fortuitous split-second decisions by all kinds of people lead in some cases to life being saved, whereas with the slightest shift in circumstances it goes the other way.

What was happening then is happening now, right now, in countries around the world.

In 1951, after my first six years of life, as a resident of Sweden, our family travelled to Canada. We crossed the Atlantic Ocean on a ship called the Gripsholm.

In the spring of that year, we were on our way by train to Toronto from Halifax. Toronto was our intended destination. We stopped, however, for a while at the train station in Montreal. My mother, at that time in her early thirties, looked at the streets, from the train station, and noticed the horse-drawn caleche wagons. She also noticed the horse poop on the roadways. She thought, “This is just like Europe!” She spoke to her husband, and they agreed: “Forget about Toronto, let’s get off the train here.” That’s how I ended up some years later at Malcolm Campbell High School.

As a child and adolescent, I marvelled at the thought that many kids didn’t realize what had occurred in Eastern Europe and elsewhere, during the war years – and what was happening in the years that followed. I pondered the fact that media – in those days print media, radio, and television – can tell us many things, and can also keep us ignorant about many things. I also ponder, even now, that the present moment always has a direct connection to what has happened in history, all through time.

The contrast between what I know and what I hear being talked about in Montreal, in the 1950s and 1960s, in my memory of those years, has prompted my interest in learning what goes on elsewhere in the world, even now, and has made me aware how little any one person can know, and how much any one person can learn, if there is some reason, whatever the reason may be, to keep on learning what there is to learn.