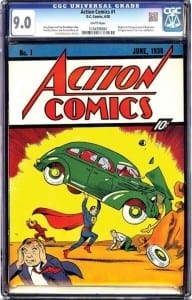 Following caption is from the Aug. 25, 2014 Associated Press article, accessible via a link at the post you are now reading: This 2014 photo provided by e-Bay shows a rare, nearly flawless copy of Superman's comic-book debut which has sold for $3.2 million. Created by Cleveland teenagers Jerry Siegel and Joe Shuster, Action Comics No. 1 introduces the Man of Steel's Kryptonian backstory, earthly role as reporter Clark Kent and identity as a champion of the oppressed. About 100 to 150 copies are believed to exist, only a handful of them in top condition. The book just sold got a seldom-seen 9.0 on a 10-point scale used to measure vintage comic books' condition. (AP Photo/eBay)

New York comics dealers Stephen Fishler and Vincent Zurzolo said Monday they submitted Sunday’s record-setting bid in the eBay auction for Action Comics No. 1, the 1938 book in which the superhero first appeared. It’s believed to be the highest price ever paid for a comic book, surpassing $2.1 million for a similarly high-quality copy of the same book in 2011.

“It’s hard to believe that a kid’s 10-cent comic could be worth that much money, but it is Superman. That’s an iconic thing,” Fishler said. “It’s the first time anybody saw what a superhero was like.”