The following information is from David Juliusson who shares this note:

“Madeleine is the expert on the Carrying Place and the original portage trails along the Humber.”

I’ve included this item in the military history category – as well as in the Malcolm Campbell High School category. The latter inclusion is because our MCHS Sixties Reunion on Oct. 17, 2015 will take place at Old Mill Toronto, located by the historic Humber River.

Join Lieutenant Governor John Graves Simcoe, in reenacting the first day of his 1793 journey up the Toronto Carrying Place.

Ending at the Governor’s 1793 camp site at Eglinton and the Humber River.

Colin Heath, Past President of the Simcoe Branch of the United Empire Loyalists, is the Gov. and Historical commentary by guide Madeleine McDowell.
416-767-7633 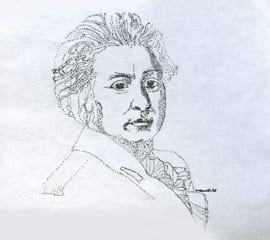 The image, drawing of John Graves Simcoe, is included with the poster.

INVITE YOU TO JOIN THEM IN REENACTING

THE FIRST DAY OF THE GOV’S 1793 JOURNEY  UP THE TORONTO CARRYING PLACE ON SATURDAY, SEPTEMBER 20th 2014

ASSEMBLING AT THE ROUSSEAUX SITE, SOUTH OF 8 THE SOUTH KINGSWAY (PETRO CANADA) TO DEPART NORTHWARDS AT

THE EXPEDITION WILL TAKE THE FORM OF A PARADE, PERMITTING PEOPLE TO JOIN AND LEAVE ALONG THE ROUTE AND WILL END BEFORE 2;00 P.M. AT THE 1793 CAMPSITE AT EGLINTON AND THE HUMBER RIVER

THERE WILL BE AN HISTORICAL COMMENTARY BY GUIDE MADELEINE McDOWELL

This year marks the two hundred and twenty-first anniversary of the expedition.

The year 1793 also marks the year in which Colonel Samuel Smith acquired, as part of a land grant, all of what is now Long Branch (Toronto) alone with land extending beyond that.