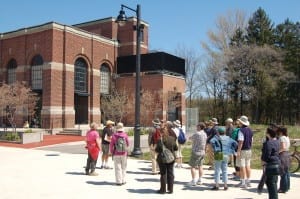 A May 4, 2013 Jane’s Walk in Long Branch included a visit to the Power Plant in New Toronto at the Lakeshore Hospital Grounds. The building, located south of the Assembly Hall, serves as a dressing room for skaters at the Colonel Samuel Smith Ice Trail during the winter months. Gay Chisholm photo 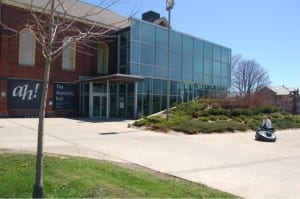 We begin at the Assembly Hall at 1 Colonel Samuel Smith Drive at the foot of Kipling Ave. at Lake Shore Blvd West. We travel along the north side of Lake Shore to Fifth Street, passing the old Goodyear Plant along the way. From there we travel north to Birmingham St., stopping at the old Town Hall and at the Campbell Soup plant. From there we travel east to Dwight Ave, and then west along Birmingham to Kipling, after which we travel south to arrive back at the Assembly Hall.

The early development of New Toronto, as Jane Fairburn notes in Along the Shore (2013), got a tremendous boost with the arrival of railway service in the late 1800s. Beginning on July 1, 1895, a radial railway ran from Toronto all the way to Etobicoke Creek. As a reliable and cheap form of transportation, the radial railway enabled working and middle-class people to find their way to what is now south Etobicoke.

What has happened in the years that followed?

We can speak of a postwar era of productivity and prosperity, with employment opportunities that in many cases didn’t require a lot of commuting.

Next came a period of deindustrialization and attendant challenges.

Now things are changing once again.

The walk, lasting about two hours, begins at 1:30 pm on Saturday, May 2, 2015 at the Assembly Hall at 1 Colonel Samuel Smith Drive at the foot of Kipling Avenue near Lake Shore Blvd. West.

Global TV featured a report about New Toronto a while back:

The video provides a good overview of aspects of the changing community that our Jane’s Walk will highlight.

Mike James and Brian Liberty will lead the walk. Jaan Pill has assisted in the organizing of it.

Mike James lived in Mimico from 1958-59 and then moved to New Toronto and lived there from 1960-1974 where he attended (the original) Seventh Street Public School, Second Street Public School, and New Toronto Secondary School (now Lakeshore Collegiate Institute). He now lives in Niagara-on-the-Lake. He has a close to photographic memory of things that happened fifty years ago in south Etobicoke. When he describes the happenings that occurred in the fifties and sixties, it will feel like you are back in that time yourself, taking in the full scene in all of the attendant excitement – and in full colour!

Brian Liberty is a resident of Long Branch. He is actively involved with the protection and preservation of Colonel Sam Smith Park (the western border of New Toronto) and food security issues in south Etobicoke. Brian is also a leader in the effort to establish a Long Branch Residents Association serving the interests of all residents of Long Branch.

Jaan Pill is a long-time resident of Long Branch (that’s in south Etobicoke near Lake Ontario right next to Mississauga). He has an interest in local history. His website is called Preserved Stories. He also has a website called MCHS2015 publicizing a high school reunion, which will take place in Toronto on October 17, 2015, that he’s helping to organize.

A subsequent post refers to the significance, in Canadian history, of the late 1800s.

A well-organized Sledgehammer Ceremony was staged on April 6, 2015 at the Small... Significance of the late 1880s for New Toronto and the First Nations of western...
Scroll to top