In previous posts, I’ve shared views about the destruction of the neighbourhood character of Long Branch (Toronto not New Jersey).

Among the posts are the following recent ones:

Comment from Susan Virtue: May 4, 2015 “Character of Long Branch” meeting at The Assembly Hall

Comment from Susan Albert: May 4, 2015 “Character of Long Branch” meeting at The Assembly Hall

Comment from David Godley: May 4, 2015 “Character of Long Branch” meeting at The Assembly Hall

David Godley had on an earlier occasion quoted a message from Steve Nazar, who had previously written:

However, my wife and I have been unhappy enough about the way Toronto’s zoning is being undermined by COA [Committee of Adjustment], by the capriciousness of the OMB process, and by the encroachment on our property despite much money and effort — that we have chosen to move out of province.

We wish you good luck in Toronto.

In a subsequent message, Steve Nazar added the following message: 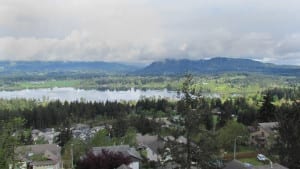 Steve Nazar writes: “Picture from our deck. You are welcome to use it if you want. We often find the view reminiscent of The Shire, in Lord of The Rings.” Click on the image to enlarge it. Click again to enlarge it further. Steve Nazar photo

You quoted me by name to a rather wide audience. Fair enough, but let me expand that brief change-of-address request that you quoted.

Yes, we feel like Toronto refugees. We would never have spent the time and money on our move, if we had not been driven out of Toronto. What had been a very pleasant neighborhood of backyards and gardens, was fast becoming a high-density brick barracks. Zoning laws meant nothing.

True also, that the high market price of our Toronto house both enabled our move, but also ensured that we needed to move far from Toronto to find anything better.

In Toronto the root cause of neighborhood instability is the balance between supply and demand. Nothing any of us can do will change that balance soon. Toronto transportation is limiting, because of the density of the city core and poor transit infrastructure. So any new land available at the perimeter is too far in travel time from the jobs. Although the run-up in housing prices is in part a consequence of growth and under-investment in infrastructure – there is also the positive aspect of the remarkable availability of work. Not all cities can claim to have such low unemployment.

But fundamentals aside, there is absolutely no doubt that management of the problem could be hugely improved. Persist in your efforts!

Why is management of growth so miserably bad? Toronto is the business capital of Canada, so business dominates the agenda, including housing. Vague values concerning air quality, trees and neighborhoods are low on the priority list. Fundamentally, people are not the priority.

Good luck with your efforts. But so far, most of the voters only see their rising property prices. Most home-owners are like frogs in a pot, all happy the water is starting to warm up.

[End of text from Steve Nazar]

In years past, Steve Nazar has provided strategic advice that has been among the key ingredients that led to an outcome, that was satisfactory to all parties, concerning a proposed severance in September 2014 at Villa Road, which I’ve described at this post:

We support community-driven urban planning at the City of Toronto

The residents of Villa Road, and of the wider community of which Villa Road is a part, owe a debt of gratitude to Steve Nazar, David Godley, and many other civic-minded individuals. During the years he lived in Alderwood, Steve was an active member of our community and played a key leadership role in a wide range of contexts. His work on behalf of community interests in Toronto has been a strong source of inspiration and motivation for me and for many other residents.

I am very pleased to be keeping in touch with Steve through the Internet. The street that I happen to live on, in Long Branch, has benefitted tremendously from his help, in the course of key conversations related to how best to address specified community challenges, during the years that he and his wife lived in Alderwood.

When there’s a problem that exists, it’s useful to figure out what the problem is, and how it can be addressed. The larger context of the destruction of the character of Long Branch, from what I can gather based on my limited understanding of what’s what and who’s who, is among other things an economic one as addressed, in a rudimentary way, in the following posts among others:

Can the term “neoliberalism” be turned into a useful analytic tool?

That is, a May 8, 2015 Globe and Mail article is entitled: “Laurie Campbell: Credit Canada CEO shatters debt myths.”

“Ms. Campbell has come to strongly believe the root cause of Canada’s debt problems lies in consumerism – the compulsion that makes people want the latest electronic gadgets, bigger houses and pricier cars.

“Her only debt is the mortgage on her house in Toronto’s Scarborough Bluffs neighbourhood, and she says she was content to buy her kids’ clothes at Wal-Mart or Value Village when they were younger. Her indulgences? It’s not an extravagant list – she says she likes travelling, and she happily pays for pedicures.

“For many people, however, debt is a habit, and helping people reduce their debt is a process Ms. Campbell likens to dieting, with most people finding it hard to stick at it.

“ ‘You’re talking about lifestyle changes,’ she says. ‘You can’t change your money habits for six months, until you get out of debt, and then go back to your old habits. It has to be a lifestyle, over a lifetime.’ ”

A second May 8, 2015 Globe and Mail article is entitled: “In deep: The high risks of Canada’s growing addiction to debt.”

“Not everyone struggles with debt. In fact, nearly a third of Canadians are debt free. But a small, highly important, share of households are drowning in debt and could pose a major risk to the economy.

“ ‘You really have to look at the extremes, as opposed to just talking about averages. There’s a group of one to two million people out there that really scare me,’ says Moshe Milevsky, finance professor at the Schulich School of Business at York University.

A mouse came to visit me at my home office. The next day I drove it to Marie... News Release – “Visualizing Absence Art Exhibition”
Scroll to top