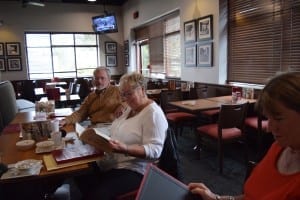 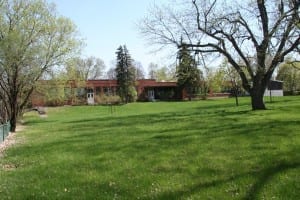 By way of images for this post, I’m pleased to share some photos that Scott Munro, of the organizing committee, took recently while attending a conference in Montreal. Scott reports that driving is less of a hassle in Montreal these days than in Toronto, because, in Scott’s experience, Toronto has gridlock, whereas Montreal does not.

Please note that if you do a search for topics such as “Cartierville,” “Church of Good Shepherd,” “Scott Munro,” and so on, using the internal search engine at this website, you’ll find previous posts about these topics. You can also find previous posts through a Google search – for example, by pointing your browser to “Cartierville Preserved Stories.”

At our May 13, 2015 meeting, we talked about the fact that, when we go to visit one of our old elementary schools, the place tends to appear so tiny. That makes sense, because in those bygone years we tended to be rather tiny ourselves, and the buildings in those year loomed like big enormous structures in front of us. 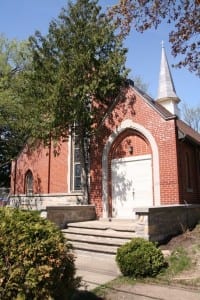 “Hi Jaan – I was in Montreal last week for a meeting and took the occasion to visit the old neighbourhood. I have for you two pictures of MCHS (now an Armenian school), two pictures from the block where you grew up (S-ward from Forbes, N-ward from De Salaberry), one of the Church of the Good Shepherd (now used by 7th Day Adventists) and, on the other side of the street, one of Cartierville School (once used as a Montessori school but seems vacant now). An MCHS pic might be useful for our web site, which is why I took both a landscape and a portrait orientation. Cheers – Scott.”

Thank you, Scott, for sharing these great photos!

We may also have one or two photos to share from the May 13, 2015 meeting in Kitchener, but I make a point of checking with people before I post such photos to a wide audience. 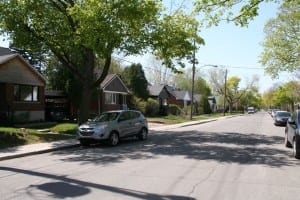 Jaan Pill met on May 12, 2015 with Sheila, the Sales Executive who is our contact at Old Mill Toronto. Sheila mentioned she likes the fact that the MCHS 2015 organizing team like to approach things in a detail-oriented way.

In this post I’ll focus on a few updates related to the planning of the MCHS ’60s Reunion and Celebration of the ’60s.

At our May 12, 2015 meeting, we discussed the ice breaker, a concept that Lynn (Hennebury) Legge has introduced, that we will use to start off the evening, on October 17, 2015. In speed networking, people will be moving about the room, talking to people and picking up name cards, that the organizing team provide. In the end the person with the most cards gets a prize, plus everyone wins by getting to connect with more than just their initial contacts at the reunion. 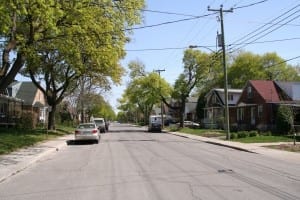 Lynn (Hennebury) Legge and Gina (Davis) Cayer have recently ensured that we have a clear picture of our budget. We are keeping costs as low as possible, while delivering a top-quality experience for the reunion attendees. By way of example, a member of the organizing committee will supply a microphone and portable amplifier, for the event, at no charge. 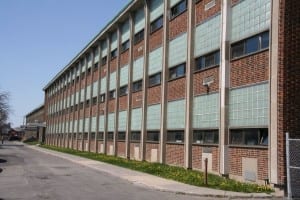 People who’ve attended previous events have often spoken of the fact that, if they are having a conversation with another person, it’s helpful to be in a quiet enough setting, so that you can hear what the other person is saying.

For people at the reunion who want to find a quiet place to chat, they have the option of wandering anywhere in the building. There are plenty of places to chat in the hallway just outside Brûlé Room C, where the reunion will be held. People can also find a place to sit and chat on any of the floors. If the weather is good, and chairs and tables are still set up on the outdoors patios, those could be used as places to hang out. Jaan Pill learned about this option in the course of a conversation with Sheila, while walking by Brûlé Room C on May 12, 2015.

D.J. for the evening

Gina (Davis) Cayer, who has taken on the task of tracking down a list of D.J. candidates, reports good progress toward the finals step, which will involve the announcement of who the D.J. will be.

We are developing a Playlist of ’50s, ’60s, and ’70s songs. Gina (Davis) Cayer, who has been posting songs online at the MCHS Facebook Groups, is a key player in the development of the playlist. Part of the list will include songs that were favourite songs of Alumni who have passed away. 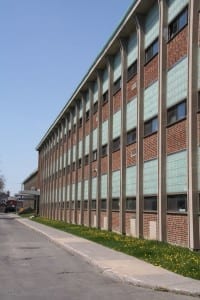 Rather than renting two rooms – Brûlé Rooms B & C – at Old Mill Toronto, we decided on May 12, 2015 that it would be more prudent, in terms of our budget, to release Brûlé Rooms B, and to rent just the one room.

With one room, were looking at the maximum of 150 people in a buffet dinner arrangement, and 200 maximum if we have a sit-down dinner.

We are beginning to get details into place regarding a possible get together, for people who are interested, at a couple of locations on the Friday evening, one of the locations being the Home Smith Jazz Bar at Old Mill Toronto. The Jazz Bar is first come, first served. There is jazz starting at 7:00 pm on Friday and Saturday, with a $10 cover charge.

For the Saturday, we are planning a nature walk, led by Scott Munro, during the day along the historic Humber River near Old Mill Toronto. We will also be posting information about great shopping opportunities in Toronto, for those of us who like to shop. There may be some of us, among the MCHS alumni, who like to help out with keeping the economy going, by engaging in the experience of shopping. Toronto offers many shopping experiences to choose from, as we will highlight in future posts.

As well, Gina (Davis) Cayer has found a great online video about things to do, if you are a visitor to Toronto. We will post the video in the next while, as well. As well, we are working our way through large numbers of Toronto tourist brochures and handouts, seeking to locate items that are especially appealing to visitors to Toronto. 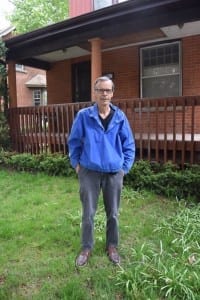 Jaan Pill on May 13, 2015 in front of Scott Munro’s house in Dundas, Ontario (now a suburb of Hamilton) on a rustic, tree-lined street where Scott has lived for many years. On May 13 on our way to Kitchener, we talked about the Driver Education program that Mr. Lafon taught in the 1960s at MCHS. Scott Munro photo

The Brunch at Old Mill for October 18, 2015 costs $34.95. We have reserved a table for 20 people for 11:00 am that day, on the second floor, which offers a great view of the pastoral landscape by the Humber River, where Old Mill Toronto is located.

Mid-October is a busy time of year; we’ve made a point of reserving a table early. Once we have a sense of how many people, from the reunion, want to join us for Brunch, we will arrive at a final figure, for the number of Brunch attendees.

Lynn (Hennebury) Legge has suggested the idea of a Grab Bag for each reunion attendee.

For the Grab Bag for attendees, Jaan Pill has picked up 80 copies (we can get more later) of a small, glossy booklet, published by Metroland Media, celebrating the 100th anniversary (in 2014) of Old Mill Toronto. There’s lots of photos from the past 100 years in the booklet. It’s a good item to include in the grab bag.

We know how excited people are about getting a Grab Bag, and we are making sure that this one is brimming with a diverse range of attractive Grab Bag Items. If I remember correctly, one of the items will be a Pencil. If we get around to getting all the scanning done in time, the Grab Bag will also include a DVD with PDF files of all of the MCHS yearbooks from the early 1960s to the mid-1970s, along with PowerPoint slides of key images and texts that will be screened at the reunion.

For the block of rooms at Old Mill Toronto (and at the Stay Inn) that we have reserved, we need to release any leftover rooms by September 17, 2015. So if you plan to reserve a room, at the rate available to MCHS 2015 attendees, please do it before that date.

Check-in at Old Mill is 4:00 pm but if you phone in the morning, you can see if a room is available earlier. Checkout is 12:00 noon. Reservations can start before October 17 and can be extended beyond that, at the same block rate, as I understand.

The reunion will be taking place at Old Mill Toronto, which is described online as follows:

“Adjacent to the Humber River and the Parkland and Toronto Bike and Walking Trail System, this upscale, Tudor-style hotel, open since 1914, is a 4-minute walk from the Old Mill subway station, and 12.6 km from downtown Toronto.

“Complimentary continental breakfast is provided. There’s also a 24-hour fitness centre, as well as an elegant spa, a jazz club, an upscale restaurant and afternoon tea service. There’s also a garden and chapel for weddings.”

“An atmosphere of old-world British elegance permeates this luxurious property in a pastoral setting next to the Humber River and recreation trails. Rooms and suites are individually styled and feature fireplaces and Jacuzzi tubs. The traditionally decorated dining room (in operation for nearly a century) hosts an afternoon tea service and Sunday brunch, along with weekly live performances. There’s also an on-site spa and lively jazz bar.”