I have previously posted a wide range of items of interest from David Godley, a retired urban planner who lives in Long Branch, Ontario.

An overview of the facts at hand, of the kind that David Godley has formulated in this case, if value when local residents are preparing for a Committee of Adjustment hearing.

Please feel free to contact me, or to contact David Godley directly, in the event you and fellow residents are facing a situation such as the variance application for 36 Clissold Road. There is value in networking, and in the (discrete) sharing of information. 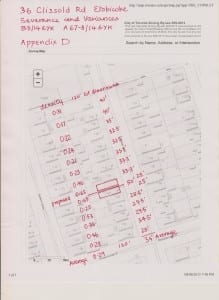 The key OP policies are:

3.1.2.3 “New development will be massed and its exterior façade will be designed to fit harmoniously into its existing and/or planned context…”

4.1.5 “Development in established Neighbourhoods will respect and reinforce the existing physical character of the neighbourhood including in particular:

5.5.1 “A fair, open and accessible public process for amending, implementing and reviewing this Plan will be achieved by: a) encouraging participation by all segments of the population,…”

I analysed the 14 lots in the immediate row. These are the key lots described as “nearby” lots according to Official Plan policies and clarified recently by the Planning Department in a report on April 13th to the Growth Management Committee (Appendix B). The closer the key house is to the application site the more important it is to determining appropriate character.

The Official Plan wording was negotiated with Residential Associations across the City over a long period in order to ensure positive new development and prevent development similar to the proposal. (Appendix C Development mistakenly permitted by the OMB in south Etobicoke)

The following is an extract from “Long Branch Community Issues” draft:

Appendix D shows the block context based on MPAC and Toronto City data. This is the existing character. Detached houses are limited to 0.45 density in the zoning bylaw, the proposed character. Conformity to both is needed.

The proposal is 232% of prevailing density

The proposal is 43% reduction of planned frontage of 44 feet

The figures for the proposal are significantly out of kilter with both existing character and planned character. They could not be considered minor in size or impact in accordance with the premier Divisional Court (De Gasperis) ruling on this issue.

Narrower lots cause disruption to the rhythm of the street and create more dominance by garages which is undesirable. This is the case with this proposal. The proposal is disruptive to the scale and massing of streetscape. The policies of the OP are undermined.

Greater density causes an extension to the rear of the property blocking views, overshadowing, overpowering walls, often overlook and can affect trees on abutting properties. Reduction of side yards to practically unusable should not be allowed for extra density. The proposal contains all these elements. The policies of the OP are undermined

The Planning Act is full of requirements for civic engagement allowing the community to shape their neighbourhood. An important aspect of any planning decision is the views and feelings of the local community so they have a say on their community. The De Gasperis case points out that even if the four tests are met that the proposal can be turned down. This is termed the fifth test and allows for the decision maker to take account of public views which in this case are strongly against. This is simply good planning as opposed to a elitist or technical approach

If the local community support the application, along with the Committee of Adjustment and agencies, all is well and good. If they do not support it, weight needs to be given to their opinions about their area. Residents have made probably the largest investment in their life in a house and it is imperative to have their own property rights protected. Thus there is a fair balance between local and citywide interests.

An incorrect decision made in a day will have negative implications for 100 years at least. Unfortunately South Etobicoke has seen many incorrect decisions, often by the Ontario Municipal Board which have had damaging effects on residents lives. In the 168 Lake Promenade case (appendix C) the owner of the abutting house is emigrating! The issue is so large that a community meeting has been held and the Chief Planner has undertaken to reform any planning documents and processes which help protect the neighbourhood.

CONCLUSION: The proposal does not conform to the Official Plan.

Planning evidence to the OMB on 35+ occasions. 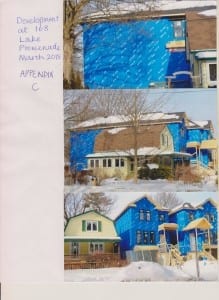 The new houses are so well integrated you cannot tell them from century homes.

Planning Advisor to LACAC. Project manager which resulted in the first Heritage district designation in Hamilton and sixth in Ontario.

2 years as an Urban Design planner.

I year Development Control in which aesthetics were key.

3600 Lake Shore Blvd West. As part of submission and meeting developer and architect the design of 600 housing units was radically changed to create a small urban square.

Focused on advising the community on public participation processes. Part of Neighbourhood Plan prepared by Council for designating Lakeshore Hospital Grounds as institutional and public open space rather than residential.

Ministry of Municipal Affairs and Housing

Planner for the first Regional Plan in Ontario which had comprehensive public participation.

Head of a team preparing General Improvement Area schemes to improve neighbourhoods to the satisfaction of the community.

“Development in established Neighbourhoods will respect and reinforce the existing physical character of the geographic neighbourhood, including in particular:

b)prevailing size and configuration of lots;

e)prevailing location, design and elevations relative to grade of driveways and garages;

f)prevailing setbacks of buildings from the street or streets;

g) prevailing patterns of rear and side yard setbacks and landscaped open space;

h) continuation of special landscape or built form features that contribute to the unique physical character of a geographic neighbourhood; and

A geographic neighbourhood for the purposes of this policy will be delineated by considering the context within the Neighbourhood in proximity to the development site, including: zoning; prevailing dwelling type and scale; lot size and configuration; street pattern; pedestrian connectivity; and

natural and human made dividing features.

Evaluation of the physical character of the geographic neighbourhood will consider

matters in the following order of importance and

influence: (i) properties in the same block that also face the same street as the development site, and

(ii) other properties in the wider geographic neighbourhood.”