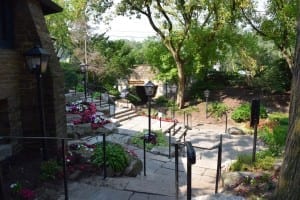 One of the remarkable features of Old Mill Toronto is that there is a passageway under Old Mill Road that takes you directly to the Old Mill parking lot. It took me several visits to Old Mill before the reality of the existence of such a passageway finally registered in my brain. Jaan Pill photo

At our meeting on July 28, 2015 in St. Williams, Ontario at the farm homestead of Gina and Dan Cayer, the Event Committee had a great time having lunch, learning about pigeons and horses, getting the stories straight about some of the MCHS grads over the years, and figuring out how to arrive at a balanced budget for the Oct. 17 reunion.

The budget story, and the solution we’ve found to ensure that our expenditures match our revenues, we have highlighted in previous posts as in:

Update: The Oct. 17, 2015 MCHS Reunion will take place at the Humber Room at Old Mill Toronto

As well, another post that deals with financial matters is entitled:

If a person (such cases are case), gets a fee reduction for MCHS 2015, it gets covered by an anonymous donation

On July 28, we also discussed the schedule of events at the reunion; I will save the discussion for a subsequent post either before of after the Wednesday, Sept. 9, 2015 meeting, at 11:30 am, at the Boston Pizza at 190 Gateway Park Drive in Kitchener, where we usually have our meetings.

All MCHS grads are welcome to join us at the organizing meetings. We see tremendous value in such face to face meetings, where a majority of our key decisions are made. 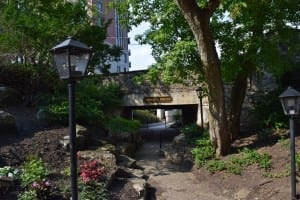 Here is a closer view of the passageway to the parking lot. Old Mill Toronto can be characterized as a labyrinth, a complicated irregular network of passages, hallways, corners, and turns. Learning your way around is in itself a delightful experience. Jaan Pill photo

The reunion will have about 60 attendees

We are very pleased to be working with a reunion that we project will be just a bit more than 60 people. The absolute maximum that the Humber Room can handle is 90. We don’t expect to have that many attendees. In the unlikely event that we have to turn people away, however, we will have no choice.

Everybody has had plenty of time to sign up; in the unlikely event a few people signal their intention, at a point where it’s too late for them to sign up, that can’t be helped. But we don’t think it’s likely we will reach 90 people. There are always some last-minute registrations but we don’t expect to see hordes of grads looming on the horizon.

We’re also aware that some people just don’t want to attend a reunion. Sometimes things go in another direction in people’s lives. Things may have happened in their lives and they don’t want to connect. And for some people, high school might not have been the best of times, as Dan Cayer noted at our meeting in St. Williams on the northern shore of Lake Erie.

Some of us will attend, even if high school was not a rose garden for us. For some, the years that followed were an improvement on the years that preceded. Each of us has our own unique experiences, with regard to what the high school years have meant for us, and how we look back at them. Everybody has a good reason to attend, or not. If people just connect with us online, it’s not the same as meeting people face to face, but it’s nonetheless a valuable way, whereby we can remain in touch, as the years proceed. 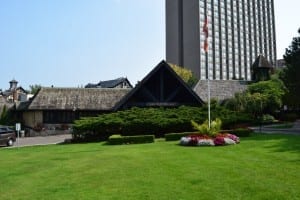 At the front of Old Mill Toronto, where there is a semicircular drive that cars can use, there is an entrance, which like all entrances eventually lead you to the Humber Room, which is on the second floor of the building. At the entrance with the semicircular drive, you would walk left down a hallway, staying to the left, until finally you come to some stairs. You descend the stairs and at that point you arrive at the foyer of the Humber Room. Jaan Pill photo

As noted earlier, we have moved to a smaller-size room because it means that we only need to have a guarantee of 50 meals that we have to pay for, in order to book the room. For Brûlé Room C, the number of meals that we would have had to pay for would have been much higher, with the potential that we would not have been able to stay within our budget. No-one wants to go into the red, to run a deficit, even for a good cause.

As we’ve explained in a previous post, we have a Business Card Game lined up, as a way to ensure that everybody – including spouses and significant others – will get to know each other quickly. We don’t want to leave the mixing and mingling to chance. Instead, we are proceeding in a well-organized way, with close attention to detail.

By way of of an update, in response to a recent question, Lynn Hennebury Legge will have 100 business cards, with the person’s name and the MCHS crest on it, available for each attendee, including each spouse/significant other. These will be in each person’s individually labelled grab-bag.

Usually this number of business cards would have cost $600 but Lynn was able to get them for $160 because the person she is working with in London, Ontario had a left-over stock of red paper for making of the cards. When money is tight, you find ways to cut costs.

As well, in response to a recent question, we are pleased to note that the non-drinkers among us will be able to have sparkling water or some other non-alcoholic beverage of their choice, for the Business Card Game and at all other times. 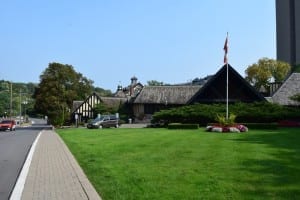 The sidewalk on the left takes you east past Old Mill Toronto to the bottom of a hill at which location a bridge crosses the Humber River. Part of the bridge was washed away in 1954 by Hurricane Hazel. Afterwards, the previous practice of building houses along the Humber River floodplain was abandoned. Jaan Pill photo

We have a number of people including Designated Drivers who are not going to be drinking alcohol. So you can put your non-alcoholic beverage over your business card when the Business Card Game begins.

How to arrange the tables

1) We’ve received a question: “Have you thought about having each table designated a specific year group?”

2) It’s also been suggested: “How about we have assigned seating, so we have a name card for each person? Sometimes, that makes it easier for people to feel at ease. Then later, such as during the Buffet Dinner, people can move around and just find whatever place where they want to sit.”

3) It’s been suggested, as well: “Why not let people sit wherever they want, right from the start?”

We’ll decide on this question when we meet on Sept. 9 in Kitchener. We’ll likely have 10 round tables, with 6 people at a table.

Everybody will know who is on the attendee list

The Business Card Game will enable us to get to know each other. We will also have printouts (in each grab-bag) of all of the names of the attendees and spouses, with as many yearbook photos as we can find for the MCHS grads among us. Grads will also have the option of wearing their yearbook photo with their name tag. As well, we will have foamcore displays, set up by the door, with a list of names of all of the attendees, with as many matching yearbook photos as we have available. 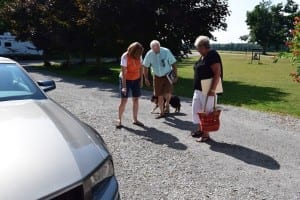 The Event Committee met on July 28, 2015 at Dan and Gina Cayer’s farm in St. Williams, Ontario. Left to right, Gina Davis Cayer, Peter Mearns, and Lynn Hennebury Legge. That’s Lynn’s Mustang in the foreground. The car insists on being featured in as many photos as possible. Jaan Pill photo

For prizes, of which there will be many as the evening progresses, we have things like golf balls, a wine set, and different oils. We’ll put them on the table and each prize winner comes up and chooses their prize.

Okay, each prize is just a token, unless you happen to be an unusually avid collector of golf balls. It’s more a fun gift than anything else. It’s the concept that matters. It’s nothing big.

Historical Items in Toronto for the Next While – From Doug Grant via Donna... MCHS 2015: Toronto attractions include Harbourfront and the Waterfront
Scroll to top