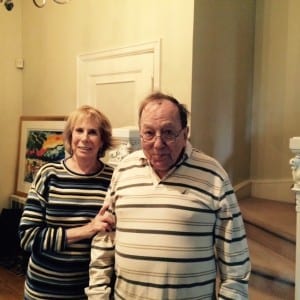 Can you tell me briefly the backstory behind the photo?

Our most recent post featuring a message from Graeme Decarie is entitled:

Hope you are enjoying what some days we can call ‘spring’.

Graeme’s son Alex, who has a twin brother in Moncton, is at Concordia and Graeme’s sister also lives here. He came over with Alex. This is what prompted his trip here. He is 83 now and writes a blog in Moncton. While he was here we spoke to Lynda Spence (married to Barclay Allen) who is in Penticton B.C.

All the very best – until the next reunion!

I visited Soryl and Gibby just yesterday. So you must be talking of the photos her daughter took of us. I was some days in Ottawa and Montreal, visiting my daughters and grandchildren in Ottawa, then to see my sister and nephew and niece and my Concordia son in Montreal. So, of course, I also dropped in on Soryl and Gibby, It was, as always, a pleasant visit – with some very pleasant munchies.

Lots of changes in Montreal, though. The whole north west part of it has become a jungle of new roads, new business towers. I was constantly lost, and felt I was in an alien land. And for this small-town boy, everything was a hell of a long way.

Sure, go ahead and run the pictures.

Most interesting to know about how Montreal has changed.

I was contacted recently by a researcher with an interest in 1970s cultural history, who sent me an old article that I had not read in about forty years; it provides an interesting overview of Canadian non-theatrical film production in that era:

I had some contact with the film world of the 1970s – and later. I did the voice-over for an NFB effort on the Notman photographs of the late 19th century. I also did one on the English of Montreal (can’t remember the name of the film), and was consultant for a film on the girls who performed in Black nightclubs in Montreal. And somewhere there must be a copy of a half hour show I did for Global TV on Montreal and the story of the Decarie Melon. I should have kept a note of these things – but I didn’t.

Additional comment from Jaan: So, when’s the next MCHS 1960s reunion?

A number of people, in messages that have circulated since the time of the MCHS 2015 reunion, have said (I paraphrase), “Let’s have another reunion, perhaps in Montreal or Vancouver.”

So, if any MCHS grad or teacher is interested in working with me to organize the Next MCHS 1960s Reunion, please let me know. We can form a committee and get to work. I would not be involved with the same level of intensity as was the case for the MCHS 2015 reunion, as I have many other volunteer and personal projects to attend to, which I put on the back burner to some extent during the planning for the Oct. 17, 2015 event. However, I know there are other people who can do a great job in organizing such an event, and I am keen to help them to make the event a huge success.

Please contact me at jpill@preservedstories.com if the concept of organizing the next Sixties reunion appeals to you; we can work together to take such a concept and make of it a reality.

May 12, 2016 @LambtonHouse 7:30 pm, Hugh Miller will be speaking about The Early... Ontario proposes greenbelt expansion as urban growth intensifies – Jane...
Scroll to top