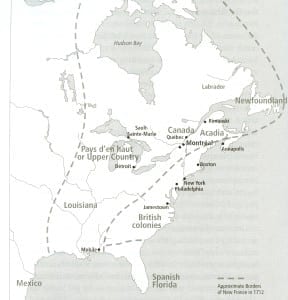 The History of Montréal: The Story of a Great North America City (2007) features a map (p. 41) of the French Empire in North America as it appeared in 1712. The next year, 1713, marked the first step, through the Treaty of Utrecht, the caption on p. 42 notes, in the dismantling of the empire. Click on the image to enlarge it; click again to enlarge it further.

At a comment at the latter post, I have added some details, which were new for me, concerning the history of St. Laurent (or Saint-Laurent, as it is also spelled, in some sources). By way of bringing attention to the details, I am featuring them at the post you are now reading.

I am really pleased to have the opportunity, 53 years after I finished Grade 11 at Malcolm Campbell High School. to be learning these new things, that I had not known about before, about the history of Ville St. Laurent (also spelled as Saint-Laurent).

My knowledge remains indistinct and hazy; any assistance that you as a site visitor can provide by way of adding accurate details to my understanding of the history of Cartierville and Saint-laurent will be much appreciated.

A book called Opening the Gates of Eighteenth-Century Montréal (1992) describes how, when Montreal grew beyond its original boundaries (the boundaries being a walled fortification), one of the suburbs that developed on a road leading north of the walls was the Saint-Laurent suburb.

In 1792, the government redefined the boundaries of Montreal, setting them at a distance from the walls of 100 chains, based on the old British measurement, or approximately two kilo­metres. The new territory, an enormous rectangle, contained the old town, the suburbs, and a sizable rural area around them.This ensured Montreal had plenty of room to grow for decades to come.

The trend continued: the suburbs especially grew and in 1825 contained a little over three quarters of the population. The biggest were the suburbs of Saint-Laurent, Quebec, and Saint-Joseph. In 1831, the government divided the area into wards for the first time, and then redivided it in 1840 and, in particular, in 1845. As of 1845, Montreal had nine wards:three in the old town (West, Centre, and East) and six elsewhere (Sainte-Anne, Saint-Antoine, Saint-Laurent, Saint-Louis, Saint-Jacques, and Sainte-Marie). The town would remain divided in this way, with only minor modifications, until the end of the century.

The above-noted book – which includes a map, based on a historical map (where the details are harder to make out), showing among other things the early St. Laurent (or Saint-Laurent, or in English: St. Lawrence) suburb north of the original fortified walls – is written in the style of a breezy travelogue through time – fun to read, but if you seek a more nuanced account, there are other sources that also warrant a close read.

Lives of Montrealers in the nineteenth century

A related Comment, at a post entitled Graeme Decarie served as historical advisor and commentator for a 1993 NFB film about the Quiet Revolution in Quebec, has also been a source of much interest to me, as it provides a sense of what life was like in Montreal – including in the suburbs – in the nineteenth century.

The text of the latter Comment has already been featured in a separate post, and I am pleased to include it in this post as well. The text reads:

Another book about Montreal history is entitled: Peopling the North American City: Montreal 1840-1900 (2011). I enjoy this book because among other things it talks about the lives of everyday people.

Chapter 4, “The Hazards of City Living,” is particularly instructive, and evocative.

When I read about the nineteenth century and earlier centuries, I think about the changes in carbon emissions that were set into place starting around the early 1600s and that began to manifest themselves in centuries that followed.

Regarding these trends, a Sept. 18, 2016 Five Thirty Eight article is entitled: “Why We Don’t Know If It Will Be Sunny Next Month But We Know It’ll Be Hot All Year.”