You Can Make Things Happen

The text of the message, from the link at the top of this page, reads:

Grab a friend and attend one of our upcoming public meetings where you can share your vision for the future of culture in Mississauga.

Can’t make the in person meetings? Join us February 22 at 11 a.m. for a twitter chat that explores diversity, accessibility and collective identity. Follow along with @SaugaCulture

[End of text from above-noted link] 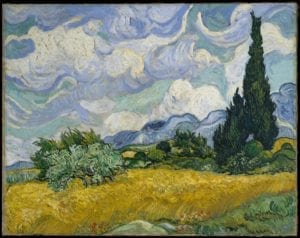 I’ve posted the image to underline that how we express and represent things determines what we see. Source for the image: February 2017 New York Times Arts ‏@nytimesarts
The @MetMuseum just made 375,000 art images available online for free, including this van Gogh http://nyti.ms/2k7dEnN

Several coordinated events and activities focusing on community engagement related to development of a culture strategy for the City of Mississauga are underway.

The Story of Mississauga

Among the areas where community engagement is playing a key role is an ongoing project called The Story of Mississauga. What a great concept: The story of a city, told by its residents.

Click here for more information about The Story of Mississauga initiative:

A related file is entitled: “City of Mississauga – Minutes of Heritage Advisory Committee (Approved May 10, 2016).”

I am very impressed with Mississauga’s approach to community engagement, which makes effective use of community input as a driving force for City-wide projects.

Among my recent posts about Mississauga is one entitled:

Another one is entitled:

What makes a good story?

The Story of Mississauga project has prompted me to think about what makes a good story:

The elements of good storytelling include (4) backstaging, (5) re-inhabitation of places through narrative, and (6) open-endedness

Several studies have a connection with storytelling as it relates to cities (and city-regions):

The Deadly Life of Logistics (2014). Stories about cities are stories about tactics, strategies, and logistics.

Places of the Heart: The Psychogeography of Everyday Life (2015). Cities are about psychology and geography, and the overlap and interaction between the two disciplines and ways of seeing.

Mississauga is very much focused on sustainability, as is evident by way of example through the focused, disciplined urban-planning work and research of City of Mississauga Ward 1 Councillor Jim Tovey and University of Toronto landscape architect John Danahy among others.

With regard to the topic of sustainability, a Jan. 3, 2017 Toronto Star article is entitled: In 2017, Mississauga will have to decide how it grows up: Mississauga’s recent booming growth will continue, but will growth be sustainable and will it be what residents want?”