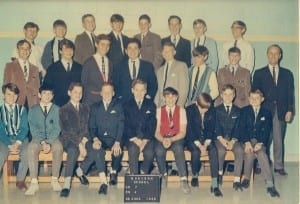 From time to time, I have asked MCHS grads, that I have been in touch with, if they would like to share some reflections about their elementary and/or high school years.

I know from my own experience, in trying to write about events and experiences of years ago, that it takes a tremendous amount of work, in order to follow through on such reflections projects.

From time to time, I’ve mentioned on Facebook that any MCHS grad who’d like to get a copy of the DVD can send me their mailing address and the DVD will be on its way. When I’ve subsequently sent out the DVDs, I’ve often mentioned that if people have any reflections to share, from their high school years, it would be great if they would send them to me, so that I can share them at the Preserved Stories website.

When Bert originally received the DVD in the mail he wrote:

“It was very interesting to see the evolution of MCHS through the years. I also enjoyed seeing not only my contemporaries (64-68) but also many of the elder siblings who preceded us and the younger ones who followed.

“Thanks very much for all that you did on this great historical and nostalgic project!”

“A few months after your e-mail,” he recently wrote, “I decided to send you some of the ‘reflections’ you invited. Here they are.”

Reflections about MCHS from Bert Eccles

The 1960s were a great time to be young in Canada (although maybe not elsewhere – even elsewhere in North America).

I associate MCHS with wonderful times in my formative years.

On my first day there in September 1964, I recall an older student looking at me and a few other friends from Morison School and saying, “These grade eight kids are getting smaller every year.” For the record, I was about to turn 13 in a few weeks, I was 5 feet 1 and a half inches tall, and I weighed 107 pounds.

We were herded into the gym and teachers called out names of who would be going where. I was pleased to see that there would be many of my fellow Morison alumni in our 8A class. I was less pleased when I got to the class and we seemed to be bombarded by forms, papers, combination locks, and regulations. Soon, though, all feelings of strangeness or trepidation vanished and MCHS quickly became a place that offered fun, friendships, and growth of all kinds.

Just by doing what we were told we were able to learn most of what we needed, although there probably should have been a little more curriculum content on practical matters like finance, health, and nutrition.

There were many teachers who deserved appreciation for their involvement in coaching sports and supervising activities. I enjoyed soccer, basketball, and ping pong, among other things. Sometimes we just ended up in various areas because the teachers knew they’d be a fit for us even if we hadn’t considered them ourselves. In my case, I’m thinking especially of Debating (thanks, Mrs. Gilday), the Gazette literary competition (thanks again, Mrs. Gilday), and Reach for the Top (appreciation to Mrs. Greenberg, a truly great teacher). In all those cases, I was drafted and in all those cases I’m thankful for the conscription that took place.

I could also include all the French activities shepherded by Mr. Christmas: in many cases, his efforts were largely unappreciated at the time but you have to give him full credit for his continued enthusiasm in everything he did.

For a while the times were innocent but just as the world was changing in the brief era of Vietnam, the Beatles, and Haight-Ashbury, MCHS was also evolving…although that evolution only really began to be expressed a couple of years after my class (1968) graduated. In our final year, the most obvious expression was the dissemination of “The Invisible Circle” as a semi-radical alternative to “The Carrier”. Those who were there can also remember “The Great Escape” that took place one day in June 1968; those who weren’t will only ever hear of it in an off-the-record context.

I am delighted to know that the DVD arrived in good shape.

I was interested in your comment about the evolution of MCHS over the years. Thank you for your kind words about this nostalgic, historical project [that is, the creation of the 1962-63 to 1973-74 MCHS Yearbook CD]. I’m pleased that, with help from many people, I’ve been able to contribute to this project.

From time to time, MCHS grads have written overviews about what the MCHS years meant for them, for posting to the MCHS website. Sometimes they’ve also scanned photos, which we’ve posted to the website. In the event you or students that you know from those years would like to write such overviews and reflections, I would be pleased to post them.

Humber Lakeshore has their tunnel exhibit this Saturday, Feb. 25, 2017. Check... Local Appeal Body for Toronto is still in process of being set up
Scroll to top