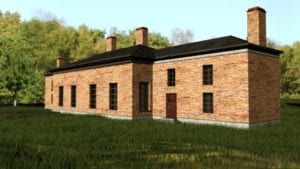 The image is from the CBC Day Six article, for which a link is included at the post you are now reading. Caption: “A computer-generated image shows what the two brick buildings of Upper Canada’s first Parliament would have looked like in the early 1800s. (Robert Grillo/ASI).” Click on the image to enlarge it.

The following item is from a recent newsletter, available at this link, of the Architectural Conservancy of Ontario:

The car wash and dealership at King and Parliament Streets has long been known as the site where Upper Canada’s first Parliament Buildings once stood. But those buildings burned down twice, and it wasn’t known if any remnants remained. In the year 2000, archaeologist Ron Williamson’s firm, Archaeological Services Inc., was hired by the City of Toronto to determine if any of the original brick buildings had survived. The subsequent excavation was spurred on in part by Rollo Myers, local history activist and the former manager of Architectural Conservancy Ontario, who investigated historic documents in depth, used 3D modeling to predict the location of possible remains, and pushed the City to investigate. In October of that year, Williamson’s team discovered charred floorboards, limestone footings and fragments of ceramics, during an investigative dig.

You can read the CBC article and listen to the full interview with Ron and Rollo here: http://www.cbc.ca/radio/day6

Full historical record, as it relates to Indigenous and Settler history, is... Support the OHS Crowdfunding Campaign for the John McKenzie House; Message forwarded...
Scroll to top