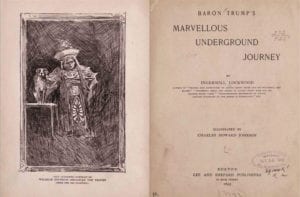 The image is from the Politico article featured at the post you are now reading.

An Oct. 7, 2017 Politico article is entitled: “Trump Is the Star of These Bizarre Victorian Novels: And the Internet is losing its mind.”

The one problem with the headline is the expression “losing its mind.”

I refer you, in this context, to the YouTube video entitled:

Keys to our Past – Language & Stigma

We must take care how we use language.

Or, is it the case that “losing of one’s mind” is an okay figure of speech? I am reminded of the expression “boggle the mind,” popular in the 1960s. Are these terms noy okay to use? I imagine arguments can be advanced, either way.

The back story, at any rate, related to the above-noted video, one of a series in a Mental Health Film Series recently premiered at Humber College in Toronto, is available at a post entitled:

That said, the Oct. 4, 2017 Politico story is of interest, in particular in its exploration of the meaning of the word “bizarre.”