I recently told Graeme Decarie that I would put together an update based on a recent email exchange with him.

The update follows below.

On Jan. 9, 2018, Graeme Decarie wrote: One of my boys, Nicholas, has been studying at university in Fredericton, and will graduate this year. Today, he got accepted for a master’s programme at McGill, starting in September. It’s information studies (archives).

So, in September, I shall have three children in Montreal, one at McGill and two at Concordia. And I think that could convince me to move back.

Anyway, it might get dangerous here. New Brunswick is owned by a billionaire named Irving who owns the government and also owns all the newspapers. For tomorrow’s blog, I wrote an article that is more than somewhat critical of him.

He is not a forgiving man.

I will post some version of your update to my website, when I get to my site. I’ve been staying away from posting for a while, taking a break.

I’m really pleased your children are doing well. That is great to know!

I continue to focus on workouts at a local college fitness centre. I’ve been working at learning to do the deadlift properly, using a hex bar.

We’ve visited a couple of universities last year. Whenever we see a university fitness centre, I enjoy seeing how students are doing their squats and deadlifts. I’ve observed they are all doing a great job of keeping proper form – e.g. maintaining a neutral position of the spine (which along with using the hips as a hinge, involves taking in a deep breath and holding it, while tensing specified muscles) during the deadlift; and keeping the knees from travelling forward (past the toes) during the squat. 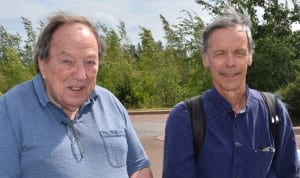 Graeme (Jan. 9, 2018): I took to very long walks in a neighbouring wilderness park – until the big storm. Now, I settle for swimming in a pleasantly heated pool, and I shall be moving to weights.

I am going to make an effort to post an item to my website over the next day or two.

I’ve been spending much time writing notes in a notebook, using a calligraphic fountain pen.

The last while, I’ve also been reading about Mussolini, decolonization, and related topics:

Graeme: Your reading reminds me of Vera Lynn, the British songstress of World War 2 who sang about how we were fighting the war to end all wars so we could live in a world of peace. “There’ll be bluebirds over the white cliffs of Dover….”

Our political and business leaders broke every promise that was made. The UN was created, but immediately neutered. The U.S. has invaded over 70 countries since 1945. And Britain, far from being free, lost its empire and so now has to kiss up to the U.S. – as does Canada.

The reality is that World War Two is still on. But the U.S. is now the great Nazi power.

Jaan: A good overview, that you have shared.

I forgot to mention that I’m reading all of this with an ear for the Indigenous perspective. It’s been remarked that, if one wants to know what the world would be like had the Nazis won the war, one would need only to consider the fate of Indigenous peoples in North and South America and elsewhere.

I would say, speaking for myself, the Nazi comparisons can only go so far. The United States does not have a plan, as Nazi Germany did, to murder Jews, wherever they are living.

Among the themes that I’m exploring in my reading concerns the similarities between nineteenth-century massacres in Germany colonies in Africa, and Nazi Germany’s later massacres related to empire-building in Central/Eastern Europe. From what I’ve read, with regard to the two events, there is not a direct link. The Nazi empire was a unique formulation, drawing upon circumstances that were not at play, in the same manner or at the same extent, in the German colonies.

It took me a while, based on my reading over some time, to understand the conclusions that researchers have arrived at, regarding this topic.

Another theme I have been exploring, in my reading of a wide range of recent books, concerns the Addis Ababa Massacre during Italy’s Fascist era. In a book entitled The Addis Ababa Massacre: Italy’s National Shame (2017), Ian Campbell suggests that the Nazi attempt to set up an empire stretching across Central/Eastern Europe was directly influenced by the atrocities, that occurred in Ethiopia in 1937.

With both my strength training regime, and with my reading related to the Second World War and postwar era, I’ve been focusing on studying these topics at some depth.

With history related to the Second World War, I have found that Richard J. Evans serves as an exemplar of history writing at its best, at least from my perspective as a reader. In all my reading, I want to know how well acquainted a writer is with the available evidence, and I want to know the framework within which it is presented. As well, I attend closely to the quality of reader engagement, and the flow and structure of the writing.

The value of compound exercises (such as the deadlift) is something that dawned upon me in recent years, as I read book after book about strength training. Learning all of the details, of how to perform a compound exercise correctly, is a great learning experience.

Mastery of the correct form does not come easily, for me. It requires a lot of practice, and close attention to detail. Perhaps especially because it requires a lot of work, in order to attain mastery, I so much enjoy the entire process. Having a good place to work out, with all of the equipment and space that is required, has been especially important, to enable me to make good progress, in this area.

Similarly, I’ve been reading about prewar, wartime, and postwar history in much greater depth than I have in the past. It’s my way of learning about this aspect of history, so that I better understand the meaning of the photos in my father’s 1936 Berlin Olympics photo album – and that I so much better understand the present moment.

In 1980, 2% of Peel’s neighbourhoods were considered low-income. Now,... Mindfulness is a great thing, as is human happiness – especially without...
Scroll to top