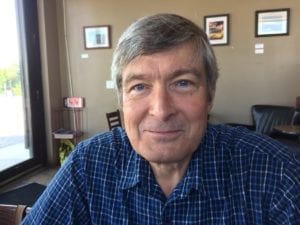 Ron Jamieson. Our interview on May 30, 2018 took place at the Fair Grounds Café and Roastery in Long Branch. Jaan Pill photo

Having lived in Long Branch for 21 years, I’ve noticed that some residents just spin their wheels, while others get things done.

On May 30, 2018 I spoke with Ron Jamieson, whose background includes marketing and engineering. Given his strong analytical skills, and a strong attachment to Long Branch, Ron gets things done.

At our interview, we spoke about the culture of decision making at the Etobicoke York Committee of Adjustment, and the Toronto Local Appeal Body (TLAB).

I will mention two key points, from our interview.

Ron Jamieson notes that written decisions from the Etobicoke York Committees of Adjustment provide very scanty information, compared to land-use committees elsewhere. A typical written decision from, say, Vaughn or Oshawa, outlines the case, highlights what each person said, and presents a rationale, that justifies the land-use decision. 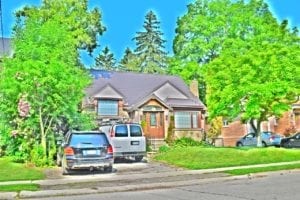 38 Thirty Sixth St. in Long Branch. Jaan Pill photo. (I have used a filter, as a way to respect the privacy of owners – e.g., you can’t readily read license plates – while sharing a sense of what a property looks like. Photos have been recorded with Nikon D3300 DSLR using in-camera filter.)

Such details are totally absent in Etobicoke York. Written decisions are generally restricted to the observation that variances, for a given case, are “minor.” The variances are at times twice as large as what the bylaws permit.

At the Etobicoke York Committee of Adjustment, subjectivity drives decision making. Decisions appear arbitrary, made on a whim. Numbers are ignored, and detailed rationales for decisions do not exist. At the hearings themselves, reasons for decisions are presented in vague terms such as: “We drove around the neighbourhood and saw it was eclectic.”

Secondly, I was struck by Ron’s insistence on fairness, in his analysis of land-use decision making. He refers to 79 requests at the Etobicoke York Committee of Adjustment to sever properties from 2012 until May 2018. “While I think that a lot of people suspect there is bias, in the Committee of Adjustment,” he notes, “it’s not really apparent from the numbers. The committee has approved only 57 percent of the 79 applications. 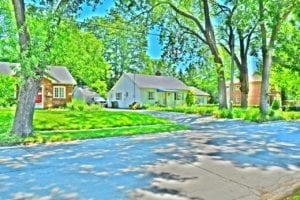 9 Thirty Eighth St. (white house at centre) in Long Branch. In its original decision, the Toronto Local Appeal Body accepted a lot-severance proposal for the site. In a subsequent, revised decision, the outcome of an appeal by Ron Jamieson, a Party at the original hearing, the severance proposal has been rejected. A PDF link, at the bottom of the page you are now reading, provides access to the revised TLAB decision. Jaan Pill photo. Click on the photos to enlarge them; click again to enlarge them further.

“However, where it gets really interesting, is when you take it to the OMB. If a builder is refused approval on their severance application at the Committee of Adjustment, there’s an 88 percent probability that the OMB will overturn that. Now, that’s pretty significant.”

A future article will outline emerging, numbers-based trends related to land-use decisions at the Toronto Local Appeal Body, successor to the OMB, and will include YouTube clips featuring Ron Jamieson.

Text of the final version of the 9 Thirty Eighth St. decision, referred to in above-noted opinion article, can be accessed here:

Mississauga South Historical Society Public Presentation at Riverwood Conservancy,... Homeowner fights to save 100-year-old trees, set to be torn down by developer...
Scroll to top