RALLY AGAINST U OF T BACK CAMPUS PROPOSAL

The headline, subhead, and opening paragraphs of a Feb. 25, 2013 article by Theodore Yan in The Varsity reads as follows:

Turf war over fate of U of T Back Campus 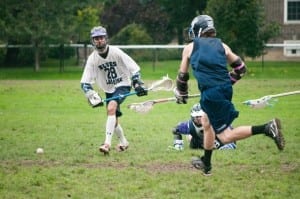 Photo accompanying the article; the caption reads: Lacrosse players on the UC backfield. Replacing the natural grass will mean some sports can no longer be played comfortably on the field. BERNARDA GOSPIC/THE VARSITY

A plan to replace the natural grass on the University of Toronto’s Back Campus with artificial turf has been met with a growing chorus of opposition from students, staff, faculty, and even former Pan Am organizers.

As part of preparations to host the 2015 Pan and Parapan American Games, the university announced plans to convert the backfield behind University College and Hart House to a field hockey pitch, composed of polypropylene or polyethylene synthetic turf. Members of the university community are speaking out against what they perceive to be an irresponsible course of action.

[End of excerpt from the article]