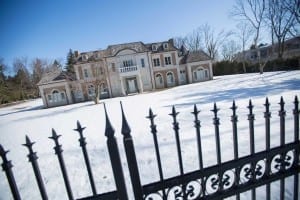 Photo source: Randy Risling/Toronto Star. The caption for the photo, which is from an April 5, 2014 Toronto Star article (see link at this blog post), reads: "A vacant mansion at 7 High Point Rd. in the Bridle Path neighbourhood. It is one of dozens of properties listed in a massive civil claim alleging mortgage fraud that investors believe could be worth as much as $17 million. The Law Society of Upper Canada reviewed documents related to three properties, including this one, and found them to be fraudulent."

From time to time, I like to share stories about evidence related to cases, or alleged cases, of scams and scamming.

I’m responding to what I’ve learned people like to read about.

The focus of the current blog is an April 5, 2014 Toronto Star article entitled:

Golnaz Vakili, now in hiding, swears she’s innocent of an alleged mortgage fraud investors say could be worth as much as $17 million. The Star probes what happened.

Here’s an excerpts from the article:

“Vakili says she chose to open a private practice because it made her more accountable.

“‘I just don’t seem to have the same results when I’ve got somebody constantly looking over my shoulder.’”