An article by Olivia Chow in the May 26, 2014 National Post is entitled: “I’ll get Toronto moving, now.”

The following message is from Olivia Chow, whose candidacy I support, as noted in an earlier editorial at this website.

The following text is written by Olivia Chow:

I can’t go anywhere in our city without someone talking to me about transit.

People like Selina, whom I met on the TTC when I was on my way to announce a policy for pedestrian safety. Selina told me she’s a big supporter of my plan for better bus service.

Because she spends four hours a day getting to and from work—on two trains, two buses and one streetcar.

There are 1.6 million people like her every day, riding the TTC. So we need a transit plan that improves service today, while fixing it and building it for tomorrow.

That’s what my plan does with clear short-, medium- and long-term priorities—from better bus service now, to a subway relief line in the future. You can see it at oliviachow.ca/transit

After almost three months of saying nothing specific on transit, John Tory says he’s releasing proposals tomorrow. So today, I have an article in the National Post about the criteria we should use to evaluate Mr. Tory’s plan, as you can also see below. 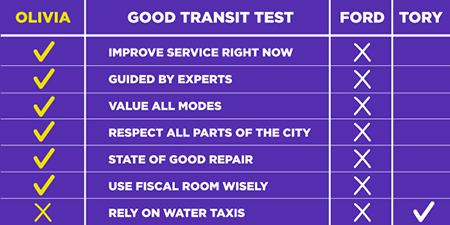 Our city has a mayor who doesn’t like or understand public transit. We can’t afford another. That’s why I will be paying very close attention to what Mr. Tory has to say, and evaluating his ideas based on these six tests.

Thanks for your interest in our city,

All Candidates Meeting, related to Provincial election in Etobicoke-Lakeshore... Behind the gang rivalry story is the back story that may take a little longer...
Scroll to top