Many perspective lend themselves to the study of what are called “inner cities.”

The article is exemplary and of the highest quality, by which I mean it is evidence-based, and has enough depth and breadth to ensure that it does not attempt to address a complex issue by seeking to capture the story in one or two brief, compelling blurbs, which is the standard way of doing things by way of election slogans, and by way of many media accounts as well. Blurbs are useful; they serve a purpose; but they have limitations.

The article in question is an opinion piece by Orlando Patterson, a professor of sociology at Harvard and the editor, with Ethan Fosse, of “The Cultural Matrix: Understanding Black Youth.”

Below are excerpts from the article; I have used headings in order to organize the excerpts. The purpose of quoting the article is to encourage site visitors to read the full article, at the New York Times website.

“Cambridge, Mass. – The recent unrest in Baltimore raises complex and confounding questions, and in response many people have attempted to define the problem solely in terms of insurgent American racism and violent police behavior. 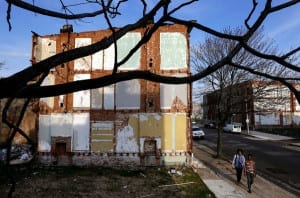 “But that is a gross oversimplification. America is not reverting to earlier racist patterns, and calling for a national conversation on race is a cliché that evades the real problem we now face: on one hand, a vicious tangle of concentrated poverty, disconnected youth and a culture of violence among a small but destructive minority in the inner cities; and, on the other hand, of out-of-control law-enforcement practices abetted by a police culture that prioritizes racial profiling and violent constraint.”

Composition of the inner cities

“According to recent surveys, between 20 and 25 percent of their permanent residents are middle class; roughly 60 percent are solidly working class or working poor who labor incredibly hard, advocate fundamental American values and aspire to the American dream for their children. Their youth share their parents’ values, expend considerable social energy avoiding the violence around them and consume far fewer drugs than their white working- and middle-class counterparts, despite their disproportionate arrest and incarceration rates.”

“Their street or thug culture is real, with a configuration of norms, values and habits that are, disturbingly, rooted in a ghetto brand of core American mainstream values: hypermasculinity, the aggressive assertion and defense of respect, extreme individualism, materialism and a reverence for the gun, all inflected with a threatening vision of blackness openly embraced as the thug life.

“Such street culture is simply the black urban version of one of America’s most iconic traditions: the Wild West. America’s first gangsta thugs were Billy the Kid and Jesse James. In the youth thug cultures of both the Wild West and the inner cities, America sees inverted images of its own most iconic values, one through rose-tinted glass, the other through a glass, darkly.”

“Its intersection with overly aggressive law enforcement was not random or inevitable, but rooted in a historical irony. As the political scientist Michael Javen Fortner documents in his forthcoming work “Black Silent Majority,” when Gov. Nelson A. Rockefeller of New York introduced draconian new drug laws in the early 1970s to combat the increasingly violent street life of New York City, he did so with the full support of black leaders, who felt they had no choice – their lives and communities were being destroyed by the minority street gangs and drug addicts.”

“In tackling the present crisis, it is thus a clear mistake to focus only on police brutality, and it is fatuous to attribute it all to white racism. Black policemen were involved in both the South Carolina and Baltimore killings. Coming from the inner-city majority terrorized by the thug culture minority, they are, sadly, as likely to be brutal in their policing as white officers.

“We see this in stark detail in the chronic violence of New York’s Rikers Island correction officers, the leadership and majority of whom are black. We see it also in the maternal rage of Toya Graham, the Baltimore single mom whose abusive reprimand of her son, a video of which quickly went viral, reflects both her fear of losing him to the street and her desperate, though counterproductive, mode of rearing her fatherless son.”

“In regard to black youth, the government must begin the chemical detoxification of ghetto neighborhoods in light of the now well-documented relation between toxic exposure and youth criminality. Further, there should be an immediate scaling up of the many federal and state programs for children and youth that have been shown to work: child care from the prenatal to pre-K stages, such as Head Start and the nurse-family partnership program; after-school programs to keep boys from the lure of the street and to provide educational enrichment as well as badly needed male role models; community-based programs that focus on enhancing life skills and providing short-term, entry-level employment; and continued expansion of successful charter school systems.”

A “long-term, fundamental change that can only come from within the black community”

“And finally, there is one long-term, fundamental change that can come only from within the black community: a reduction in the number of kids born to single, usually poor, women, which now stands at 72 percent. Its consequences are grim: greatly increased risk of prolonged poverty, child abuse, educational failure and youth delinquency and violence, especially among boys, whose main reason for joining gangs is to find a family and male role models.”

A May 4, 2015 CBC The Current article is entitled: “Civil rights movement did not do enough to create systemic change.”

How American race law provided a blueprint for Nazi Germany

Nazism triumphed in Germany during the high era of Jim Crow laws in the United States. Did the American regime of racial oppression in any way inspire the Nazis? The unsettling answer is yes. In Hitler’s American Model, James Whitman presents a detailed investigation of the American impact on the notorious Nuremberg Laws, the centerpiece anti-Jewish legislation of the Nazi regime. Contrary to those who have insisted that there was no meaningful connection between American and German racial repression, Whitman demonstrates that the Nazis took a real, sustained, significant, and revealing interest in American race policies.

As Whitman shows, the Nuremberg Laws were crafted in an atmosphere of considerable attention to the precedents American race laws had to offer. German praise for American practices, already found in Hitler’s Mein Kampf, was continuous throughout the early 1930s, and the most radical Nazi lawyers were eager advocates of the use of American models. But while Jim Crow segregation was one aspect of American law that appealed to Nazi radicals, it was not the most consequential one. Rather, both American citizenship and antimiscegenation laws proved directly relevant to the two principal Nuremberg Laws–the Citizenship Law and the Blood Law. Whitman looks at the ultimate, ugly irony that when Nazis rejected American practices, it was sometimes not because they found them too enlightened, but too harsh.