Click here for previous posts from or about Graeme Decarie >

My thoughts went back to the days when we and the world were young. I just caught a glimpse of that ancient world and you, foolishly born just a little too late probably missed it.

Jarry St. was then was short street, with just a fifteen minute walk from the city dump where I spent many happy hours in play to Blvd. St. Laurent.

From that corner, the north end of Jarry Park, the world was pure wilderness to the west and the north.

My parents, with no money to go anywhere, usually spent the evenings in long, long walks. Up to age four, they would leave me with a baby sitter, Cynthia Malcolm (whose younger brother and sister you might remember as students at MCHS.)

But it cost money for a baby sitter – a dime a night. So starting about age 5, I had to join the long, long walks – along Jarry, then plunging along a St. Laurent that ran through field and forest.

Along the way there was a tiny, Jewish cemetery with a wire fence. (I think it has long since vanished.) Then there was a railway bridge, presumably of the same line that ran by MCHS. We sometimes turned onto a bush road that ran under the tracks. This was summer cottage country where my grandparents had a tiny place.

For one week each summer, my parents saved their money to rent a cottage so far away, we had to take a train which would take us ever so far to a train stop called St. Rose. The station stood in the midst of a vast swamp. and we trudged by that frightening wilderness and down a heavily forested street to reach the cottage – which had no water or sewage. But just a short walk from there took you to a big depanneur on St. Rose’s main street with its sandy beach where I swam, and with its huge, wooden dancehall on the beach.

It all looked nicer then than it does now.

As always, Graeme, your words give rise to beautiful, evocative visual imagery, in one’s mind, of days gone by. You write so well. Compared to your skills, I’m just plodding along.

When you speak of cottages, I think of the two-stage Cottage Country Paradise that existed in the past in the community where I live.

Over the past couple of months, I’ve developed a longread History of Long Branch (Toronto) – Draft 4 article that highlights some things I’ve learned about the local history of the community in Toronto where I have lived with my family for the past twenty years. 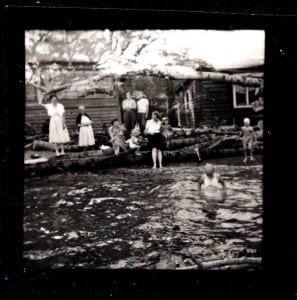 Durance family at summer cottage around the 1940s near the mouth of Etobicoke Creek at the Lake Ontario shoreline in Long Branch (Toronto) close to the Mississauga-Toronto border. The Durance family be;longed to a cottage community that can be described as Cottage Country Paradise 2.0. Cottage Country Paradise 1.0 was located to the east of the creek, starting in the late 1880s. Photo credit: Durance family Photo © Durance family and Robert C. Lansdale. The photo, from around the 1940s, is included in the History of Long Branch (Toronto) – Draft 4 that is discussed at the page you are now reading. Click on the image to enlarge it; click again to enlarge it further.

The overview talks of the days when outhouses were the standard equipment associated with cottage life away from the big cities. The first cottage community in the area, where I now live, began in the late-1800s to serve the needs of busy, stressed-out city people from Toronto, seeking to escape in the summertime by taking a boat along Lake Ontario to the wilderness areas further to the west. The first Cottage Country Paradise along the shoreline in Long Branch was a gated community, with a high fence all around it to keep unwelcome guests at bay. Things began to change by the early 1900s once a streetcar line was extended to the area.

The story of Long Branch is not unlike the story of Saraguay. A future project involves the transcribing and reporting of a great interview that I had with Bob Carswell some months ago at the Birds and Beans Café in Mimico, in which he drew a map and described the history of each house, family, and roadway that he remembers from Saraguay going back to the 1950s.

By way of also keeping myself occupied, I’ve been slowly make my way back to a pile of work associated with post-reunion reports associated with some kind of high school reunion that I vaguely remember from November 2015 – held in Toronto, of all places.

In the meantime, I’ve been working with some great people to plan a Saturday, May 28, 2016 (starts at 1:00 pm) Jane’s Walk that will take place still further west from where I live, at the Small Arms Building in Mississauga:

MCHS grads from Greater Toronto Area and elsewhere most welcome to join us for May 28, 2016 Jane’s Walk starting 1:00 pm at foot of Dixie Road at Lakeshore Road East in Mississauga

It’s my hope that, by starting to publicize the May 28, 2016 Jane’s Walk in Mississauga now, it may come to pass that one or two MCHS graduates will make their way to the Small Arms Building, to join us for this great walk.

As the information at the Jane’s walk website notes, this event is a Friendly Walk – as in Family and Dogs Friendly; Wheelchair & Stroller Friendly – and (and this is noteworthy) also Senior Friendly.

You’ll have no problem recognizing me at the event, as I’ll be the young guy (okay, a bit of hyperbole here) running around with a portable amplifier, in my quest for ensuring that those of us who are hard of hearing, and ever so slightly stooped in our posture, and standing at the back of the crowd, hear every word clearly.