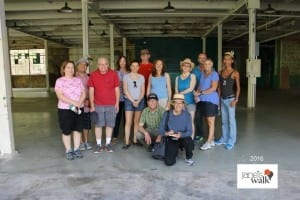 Community self-organizing takes many forms including Jane’s Walks, which I’ve been involved with either leading or organizing for the past six years. Small Arms Building – Then and Now: May 28, 2016 Jane’s Walk in Mississauga. Photo source: Gabriella Bank Facebook page

The Complete Guide to Strength Training (2015): An A-1 resource for evidence-based practice in strength training

I am currently in weeks 10, 11, and 12 of a program of strength training exercises based upon the above-noted text by Anita Bean. As in previous weeks, I’m working out three days a week, using a two-stage process. There are two sets of exercises; let’s call them A and B. I alternate the exercises, so that for example it’s Set A on Monday, Set B on Wednesday, and Set A on Friday. In this way, I can ensure there is more than one day of rest following a particularly demanding set of exercises for a particular set of muscles.

Had I not (on a visit to a Chapters bookstore) come across this book, now in its fifth edition, I would not have had it underlined, in my mind, how much a successful strength training program requires not just the use of one’s muscles.

It also requires the use of cognitive resources; the setting up of a year-long program of exercises, including stages of relatively low-intensity stages (that is, the inclusion of a periodization element) requires cognitive resources, as well as the straightforward physical exertion that is required for the lifting of weights, or the use of strength training machines.

On June 5, 2016 I heard on CBC Fresh Air a program devoted to a “Storymobile” concept in which two artists, a married couple, travel around Ontario in a roving studio. They have a van, where the recording of oral histories take place. The project is called “Town of a Tale.” Additional information and a link is available at the CBC Fresh Air website. The Storymobile will be in Oakville in June 2016 and Mississauga in July 2016. It will be at other locations across Ontario as well.

The locations, for the oral histories project, are based upon collaborations set up between community groups and the project organizers. The outcome of the project includes theatrical presentations, in the communities where the recordings are made. Part of the focus of the Storymobile visits is the concept of the Main Street (now and in the past) of a given community.

This is a great concept and I look forward to learning more about the project, which will include a focus on the celebration of the 150th Anniversary of Confederation.

Recently I was asked what I consider to be a significant military event in Canada’s history. I thought at once of two relatively little known battles that occurred during the War of 1812. The Battle of Crysler’s Farm, which I’ve outlined in a series of posts in the summer of 2014, came to mind at once. That was a battle in which regular British troops, militia, and First Nations warriors fought a larger force of American troops whose mission was to conquer Upper Canada and Lower Canada.

The outcome of the battle was that the British side won, because on this occasion the British side, although fewer in number, was better organized and had better military leadership. Along with the Battle of Chateauguay, the outcome of the Battle of Crysler’s Farm was that the American side gave up its plan to conquer Upper Canada and Lower Canada with the aim of annexing these British territories.

When the peace treaty was negotiated and signed, bringing the War of 1812 to an end, the major loss was sustained by the First Nations who had helped the British to ensure that Upper and Canada remained in British hands.

At a recent post there’s been some great discussion related to events over 60 years ago at Cartierville School in  Montreal:

I found the discussion at the post, and the Comments at the end of the post, of much interest.

Among other things, I’m reminded that, when planning the MCHS 2015 Sixties Reunion, our focus was to a great extent on the positive side of life in elementary school and high school. Inevitably, we also addressed topics which had to do with more challenging topics, including the stories about students and teachers who have passed away, in some cases through tragic automobile or train collisions.

As I think about topics such as schoolyard and in-school bullying, a topic that I used to choose as the topic for workshops at community self-organizing projects that I’ve been involved with over the years, it occurs to me that there can indeed, be a dark side to the experience of elementary school and high school. That side of the school experience warrants exploration as well.

In a recent conversation on Facebook, a recent discussion about opinions has prompted the following comments, which I have found of value and interest.

Paul Z commented: Most of our opinions have always owed more to emotion than reason. This phrasing simply foregrounds that reality.

The topic of evidence-based practice (and, conversely, the appeal of practices not based upon evidence) brings to mind the relationship among Income Inequality, Populism, and the Channelling of Anger:

A June 2, 2016 Brookings Institution article is entitled: “Should Venezuela seek international assistance? Ways out of the economic and humanitarian crisis.”