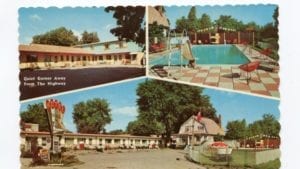 The image is from the CBC article highlighted at the post you’re now reading. Caption: An exhibition that opens on Friday night [March 10, 2017] explores the history of Scarborough’s Kingston Road motel strip. This image depicts three views of a motel at 4532 Kingston Road in 1954. (Scarborough Historical Society)

A March 10, 2017 CBC article is entitled: “No Vacancy: Scarborough art exhibition takes look at Kingston Road motel strip: The exhibition features interviews with people who had personal experiences on the strip.”

I look forward to attending this event, which I first learned about through listening to a CBC Metro Morning interview on March 10, 2017.

A March 11, 2017 Toronto Star article is entitled: “Once Canada’s gateway to Toronto, Kingston Rd. and its motel strip are changing: The road has always provided a home for those seeking shelter.”

A March 6, 2017 Inside Toronto article is entitled: “‘No Vacancy’ looks at Scarborough’s motel strip through photos and art: Exhibit is hosted by the Bluffs Gallery from March 10 to 31.”

This exhibit about a motel strip in Toronto brings to mind the ubiquity of 1950s car and motel culture, both in Montreal and elsewhere in North America. I lived in Montreal starting in the 1950s during my childhood and adolescence. I recall travelling toward Toronto from Montreal from time to time with my family around the early 1960s. 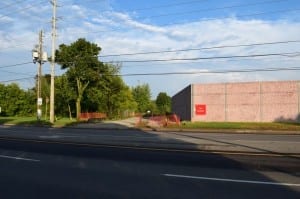 Entrance to the Small Arms Building is located east of Dixie Road and Lakeshore Road East in Mississauga. Click on the photo for a closer view of the vintage No. 2 Highway sign located at the entrance. Jaan Pill photo

A few summers ago, while travelling from Quebec to Toronto along the 401, I decided to get off the 401 for a while, as I was getting bored. I travelled along the No. 2 Highway heading west toward Cornwall. On  that occasion, I came across a park devoted to the Battle of Crysler’s Farm, which I learned (through subsequent reading) was a key battle with regard to the attempt by the United States to conquer Canada during the War of 1812. Among the posts where I’ve discussed what I have learned is one entitled: 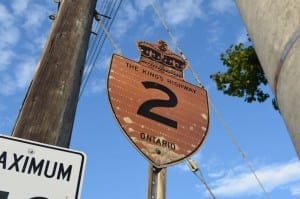 The entrance to the Small Arms Building (see photo above for an establishing shot of the entrance) features a weather-worn No. 2 Highway sign. Jaan Pill photo. Click on the photo too enlarge it; click again to enlarge it further.

The other important battle that enabled what is now Canada to maintain its territorial integrity during the War of 1812 was one that occurred closer to Montreal:

The No. 2 Highway also travelled by the Small Arms Building in Mississauga, a location that I have written about extensively at the Preserved Stories website.

Click here for posts about the Small Arms Building >

A retrospective look by Bert Eccles (MCHS 1968) at what was going on outside... DeGasperis case, related to the finding of the Divisional Court, July 2005,...
Scroll to top