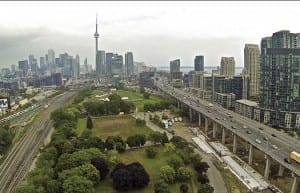 An aerial view of Fort York looking east shows the substantial progress on the Visitor Centre that’s been made by 2013. Photo by Danny Williams. Source: October 2013 Fife & Drum newsletter published by The Friends of Fort York and Garrison Common

The March 2017 issue of the Friends of Fort York newsletter can be accessed here.

The opening paragraphs of the opening article read:

“The first Fort York, built by John Graves Simcoe in 1793, had mostly been demolished by the end of the eighteenth century. When in 1987 archaeologists investigating a feature in the area between the South Soldiers’ Brick Barracks and the Southwest Bastion within Fort York’s ramparts uncovered what were thought to be remnants of a limestone-cobble foundation for one of the first fort’s buildings, they weren’t exactly surprised. (Fig. 1) But neither did it lead anywhere. The find was carefully recorded before being covered up again.

“What is known today about Toronto’s original garrison is embarrassingly little. No site plan has been found. Only a few contemporary sketches survive, but they are not detailed ones. The absence of diaries and letters of soldiers stationed there in the 1790s leaves much to be inferred from military muster rolls, spending estimates, and reports.”

The significance of the year 1793

The paragraphs being to mind a previous post, entitled: