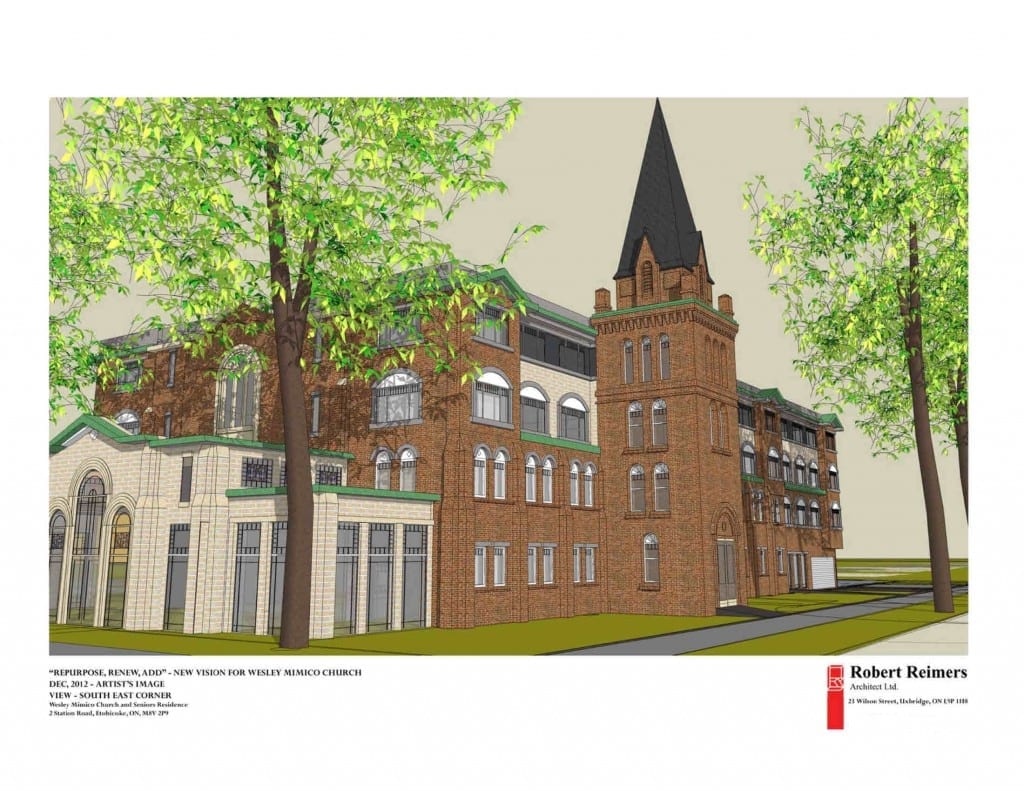 The most recent Wesley Mimico United Church community forum took place on Jan. 28, 2013. The church is located at 2 Station Road at the corner of Mimico Avenue and Station Road in Mimico.

I became interested in the Wesley Mimico redevelopment project as a result of my involvement with the Parkview School project starting in October 2010.

The story relates to a wider topic, namely: What is worth preserving?

Some people like to capitalize the event [Community Forum] that I’m referring to in this report but I prefer lowercase as it’s easier to read. It’s common journalistic practice to spell such words in lowercase.

This report is subject to corrections. I welcome any such corrections. In writing such reports, I seek to ensure they are accurate and balanced.

At the June 25, 2012 forum, the congregation announced its revised plans for redevelopment, expressed as Re-purpose, Renew, Add On. Notes from the most recent meeting, supplemented by additional information gathering on my part, follow below.

The main sanctuary of the building, on the side that faces Mimico Avenue, had not been built at grade level and is not wheelchair accessible. 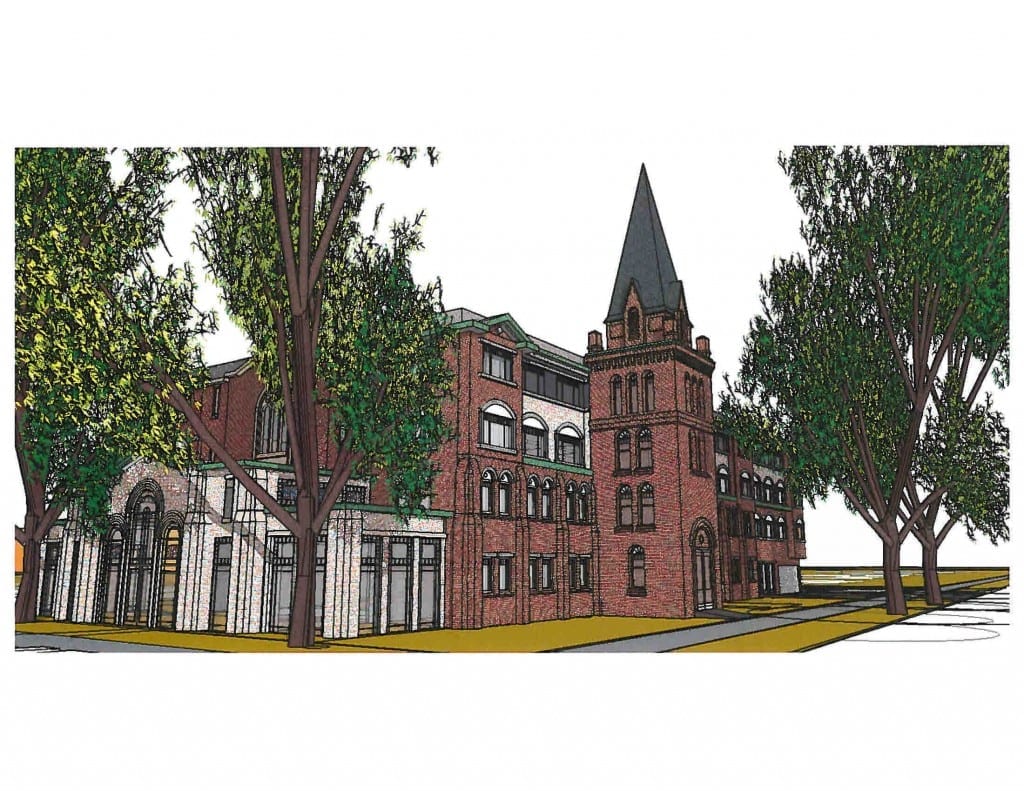 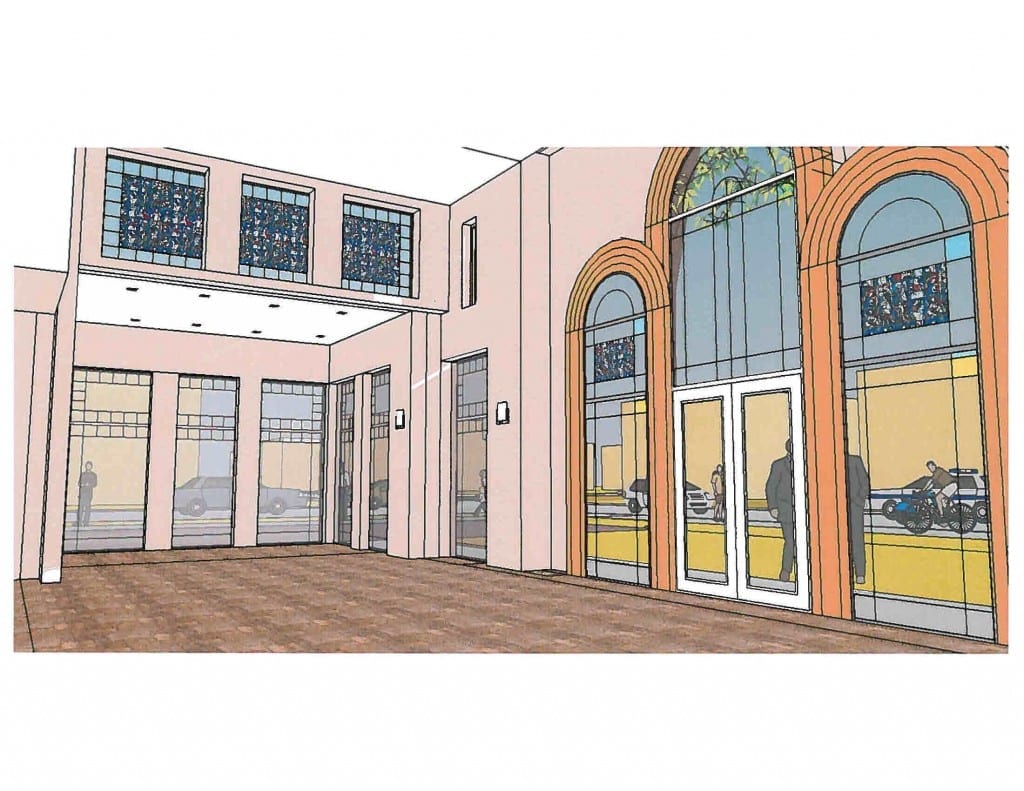 The plan is to bring the sanctuary to grade level and make it very open. People in the building would see what’s outside, and passersby would see what’s happening inside. The image positioned immediately above the paragraph you are now reading indicates the view looking outside from the main sanctuary.

The architect has worked to ensure that the character of any new addition will be in alignment with the building’s original design.

Nine stained glass windows will be saved and reused.

Much of the existing structure of the exterior will be retained. Two new storeys are included as additions, with a setback from the original structure. Their height is about the same as the existing roof when viewed at the front of the building. A planned addition at the back includes access to an underground garage

Feedback from many sources has been integrated into the design of the ground floor area, which provides space for the congregation and community outreach programs.

In the history of the church, there had been plans for a second addition to the original 1922 building, which is located at the north, chancel end. (The chancel is a part of a church close to the altar.)

The historic plans dating from 1951 had not, however, been acted upon. It’s not known why this proposed 16-foot addition at the back was not completed. The original drawings for the plans are available.

Also with regard to the building’s history, the original entrance was through doors in the bell tower, which faces Station Road.

A new addition to the church was built in 1953 to accommodate a growing congregation. The original doors at the foot of the bell tower were replaced with windows. The 1953 addition, which is noticeable by variance in the colour of the bricks, faces Mimico Avenue.

Studies will be completed to meet the requirements for a City of Toronto rezoning application. For example, an archaeological report will determine if the property was once an aboriginal settlement or graveyard. An arborist’s report will assess the quality of the trees, and will identify tree “root balls” and determine how to protect them

Other requirements include a water drainage plan, as well as parking details. The land survey has been completed. The roof plan must meet a City of Toronto Green Roof bylaw.

Further details regarding Green Development requirements can be found in the following PDF file:

A heritage impact study was under way at the time of the Jan. 28, 2013 community forum, as was a planning rationale report. Civil engineering studies must be done. The building must be integrated with the existing infrastructure.

The church part of the building when enfolded into such a redevelopment retains its property tax-free.

Robert Martindale, a heritage planner, explained that the heritage study connected with the church was in draft form. The building was listed as a heritage property in 2006. Thus an assessment of its heritage value was required.

He referred to an initial discussion, arranged as a courtesy meeting, with a City of Toronto heritage official. The draft report, he said, had not been positively received.

He described the response as representing the personal opinion of the official, who indicated that a City heritage researcher was reviewing the church building’s heritage value and would be formulating a recommendation under the Ontario Heritage Act.

The Etobicoke York Community Heritage Preservation Panel would be able to make a comment.

What were the objections? The response from the official was that she felt the architectural style was being compromised.  The objection was in reference to the view of the entrance from Mimico Avenue, and to the view from Station Road.

Robert Martindale, at the meeting with the City’s Heritage Preservation staff person, spoke of the congregation as part of the overall heritage significance of the building. The official, he reported, was focused solely on the building’s physical properties.

The official showed pictures of two ‘preferred’ options for such a building. The photos showed church buildings in which the outer shell of the building had been maintained, and a high-end condo development had been constructed in the interior.

Denise Harris, Heritage Officer with the Etobicoke Historical Society, reported that the Etobicoke York Community Preservation Panel has had a chance to review a draft heritage study, which, if I understand correctly, highlights the proposed conceptual plan for the church.

The Panel, she noted, supports designation of the building, but also agrees that the congregation is part of its heritage.

In a possible future scenario where a private developer might purchase the property, she added, past experience indicates there is potential for the building to be changed even more than has been proposed to date.

According to Harris, the ideal approach would be for designation to proceed in a way that is aligned with the church’s redevelopment plans.

Residents are encouraged to write letters expressing their views

Harris noted that it would be helpful for those who support the current development proposal to write a letter of support to Heritage Preservation Services, similar to a letter sent by the Etobicoke Historical Society. [Click on the link in the previous sentence to access the letter.]

She added that, given that an application to designate has been submitted to Heritage Preservation Services, the request could end up on the agenda of the Toronto Preservation Board and the church would then be in the position of having to defend its position before the Board. She said that under ideal circumstances, an agreement would be reached prior to this occurring.

The church’s view, if I understand it correctly, is that both the Etobicoke Heritage Society and the Etobicoke York Community Preservation Panel are recommending designation concurrent with the redevelopment plans. It’s my understanding that the church has indicated readiness to accept designation on this basis.

Current use of the building

A survey has been conducted with current users of the building. According to the survey, all community groups based in the church building said they would like to be part of the new development, and expressed a desire to return to the building when construction is completed, if possible. “They like the spirit of what happens here,” it was reported.

A non-profit, non-share corporation would be a community-led initiative. A developer, it was noted, needs at least 25% profit.

“We’re going to have a more social dividend.” That is, there will be a church, a community space, and seniors housing.

The same infrastructure requirements – sewer pipes, and so on – must be met as would be met if a condo were to be built.

What is envisaged is a modest mid-rise building. The first concept under consideration was more extreme, and met with a strong community pushback. The sight lines of the bell tower will be maintained.

Will the seniors housing be viable?

The answer shared at the meeting is that it will be viable, through the life lease arrangement. There are over 145 life lease projects across Ontario. These are nonprofits sponsored by churches and housing societies.

The building would be designed for aging in place. Such buildings have been successfully built elsewhere, for a growing demographic of seniors.

Marketing will expand in what are described as “ever larger concentric circles from the church into the larger community.”

Interested persons are invited to register on an information list, or with a refundable, no-interest deposit of $100 in order to add their name to a numbered list, to be approached in sequence at the appropriate time. Anyone interested in acquiring housing in the project is welcome.

A non-share, nonprofit corporation will be set up under Ontario legislation and under oversight of The United Church of Canada.  It will be named Wesley Mimico Place, Inc.  The development corporation will not be a charity.

There will be a second entity, a nonprofit charitable corporation. It will have the mandate of finding support and financial resources, especially for the community outreach activities centred in the redeveloped facility.

The corporation would coordinate with other local agencies in providing outreach programs for the community. It will be named Bells of Mimico Community Service Organization.

Each of the two corporations will have a board of directors with an arm’s length relationship to the church. The congregation and the United Church would not have direct control.

The board in each case would be laypeople. They could hire program staff to run a program. Staff would be hired to manage the building. There would likely be a residents’ advisory group.

A lawyer has been retained.

The original plan was for extra housing units on the first floor. A decision was made, however, to have more space for the community, if the economics will allow.

How much will units cost? These are midrange units. They are not high-end. They will be modestly priced but built for the long-term.

There will be durable finishes, good hardware, and other things that go with the concept of aging in place. For example, it doesn’t cost more to have a wider door, wide enough for a wheelchair. Units need to be designed to accommodate a walker or a wheelchair.

You can install levered handles, which are easier to turn and standard doorknobs. You can install grab bars in washrooms. Such design is a little more expensive, but if you plan it advance, you can handle it.

The aim for the housing is to provide “safe, modestly-price, sustainable, owner-occupied housing for seniors and disabled persons looking for low-rise apartments in a walkable, liveable community.”