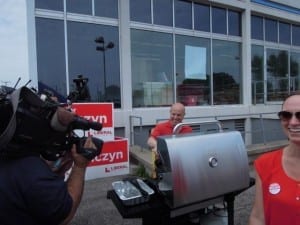 I strongly support Peter Milczyn in the Etobicoke-Lakeshore byelection.

I strongly support the legacy of Laurel Broten, who served for 10 years as the MPP for Etobicoke-Lakeshore serving in many important key positions.

Having spent many years working with very young children and later as an elementary school teacher, I’m aware of research such as that of Fraser Mustard and the policy recommendations of Charles Pascal concerning the implementation of full-day learning for 4- and 5-year-olds.

The Ontario Liberal Government has taken this research and policy recommendations and has implemented full-day kindergarten in Ontario. This is a highly significant achievement.

High quality early childhood education has a tremendous impact on the future economic well-being of a society, as indicated by methodically sound longitudinal research cited by Fraser Mustard, Charles Pascal, and many others.

At the local level, in the Long Branch community where I live, Laurel Broten played a key role in ensuring that Parkview School remains in public hands. Again, this is a significant achievement.

Peter Milczyn, running in the byelection in Etobicioke-Lakeshore, is similarly effective in service of the local community.

I was impressed with a speech that Peter Milczyn, who grew up in Mimico, gave at the Etobicoke York Community Council on April 21, 2011 when the first attempt was made to arrange for heritage designation of the Amedeo Garden Court buildings, also known as the Mimico Estates, in Mimico. He spoke eloquently of the value of heritage designation in such a case. A recently published overview regarding redevelopment plans related to Mimico can be found here.

I’m serving as a volunteer in Peter Milczyn’s by-election campaign.

For your interest, here are some recent posts regarding the campaign:

Peter Milczyn: Directing Toronto city engineers to a washed out bridge in the area morning of July 9, 2013

You know who I am.

I have a track record of serving this community over the last 16 years.

I’ve been fiscally responsible on Council.

I’ve demonstrated that I have the skills and experience to plan and execute, effectively, complex issues.

We have 311 in this city, a tremendous customer service that we now have, that I helped implement.

I helped to guide the city’s Official Plan over the last few years.

We revamped a harmonized zoning bylaw that was a disaster, to something that was almost universally supported, in the last few months.

But I need your support.

Because we need to have a government at Queen’s Park that will build what matters, to us.

That will build public transit.

That will build infrastructure.

That will invest in job creation programs.

That will help students go to university and colleges, and exit there without crippling debt.

That will invest in health care.

Yes, we have to do things much more efficiently, and I will work on that.

You know that I will, because I always have.

But on August 1st,  you do have a choice.

Do we want to build what matters, or do we just want to say No, to things?

[End of excerpt. The full text is in the link below.]

All Candidates Discussion Meeting will take place on July 25, 2013 (see link below). Other scheduled All Candidates meetings are posted at the Milczyn Campaign website.

https://preservedstories.com/wp-content/uploads/2019/04/Preserved-Stories-logo-horizontal-1.png 0 0 Jaan Pill https://preservedstories.com/wp-content/uploads/2019/04/Preserved-Stories-logo-horizontal-1.png Jaan Pill2013-07-22 09:30:552013-07-22 10:46:06I strongly support the Ontario Liberals because of their work on behalf of early childhood education – and because they ensured Parkview School remains in public hands
0 replies