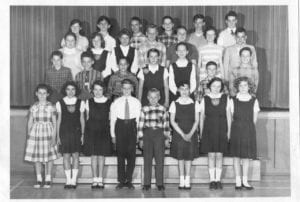 Tim Hewlings has been reading some of our posts about years gone by and has added one of his own, by way of a recent comment. 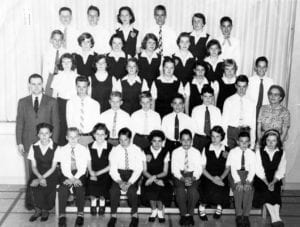 June 1959, Morison School, Grade 7. With regard to the photo, Janet Barnes has commented on Facebook: “I was 4  years old.” Photo source: Allen Jones

He adds: “Nice story about Joelle [King]. Both Ron Dykhof and Fred Laflamme had written me about her passing. Made me think of couple of photos Allen Jones dug up recently. Thought you might be interested in putting them up. Our grade 6 class from Laurentide School and our grade 7 class from Morison.”

Here are the names we have figured out so far [names in square brackets have been added, from other sources, to Tim’s original text]:

Stratford is indeed a nice place. Haven’t been for ages. About 20 years ago I did some recording there for one of the plays. The music and sound was being produced by a composer I knew from Montreal.

I am in regular contact with Allen Jones and Doug Singer. Doug and I get together every few months, but he spends the winter in Bonaire where he and his wife have a house – they can go scuba diving every day, lucky devils.

Does anyone have news updates for Bruce Clendenning and Stuart Clendenning? I remember them well from those years but lost touch as the years went by. News updates about other students (Marilyn Willis, Carol McCowan among others) would also be of interest. I’m pleased I met Marilyn Taylor at the MCHS 1960s Reunion at Old Mll Toronto in 2015. Also I’m pleased that I’ve been in touch over the years with Christine Hamilton.

I remember John Frost. He was on my team in a memorable soccer game at Morison, a game that has stayed indelibly engraved in my mind. We were initially behind, but (as I recall) I played a role, in rallying the team – and we tied the game and then scored again to win the match. That’s as I remember it, at any rate, these many years later. It was one of those small events in team sports that have always stayed in mind for me. That one event underlined for me that there are situations in life where the level of motivation, and the communication of it, can have a strong impact on the outcome.

I had shared with Tim a previous post about Stratford:

In Stratford as in Toronto and Mississauga, people have worked together many years, in order to save cherished historical buildings and neighbourhoods from destruction

Through some Facebook posts I’ve learned that there was a cub scout leader named Clendenning. Meetings were held at the Val Royal Baptist church on O’Brien in the early 1970’s.

I’ve also learned that Stuart Clendenning worked in landscaping for Mr. Meeks after high school and later attended and then became faculty at Ontario Agricultural College in Guelph (now part of University of Guelph).

Also, the memories have come back for me regarding Bruce Clendenning. He went to work at a bank and later was a bank manager. I remember my mother telling me about that, years ago. Bruce was also on an email list for discussions related to an MCHS reunion some years ago.

If anyone has further details – about Bruce and Stuart, and also Brian Meeks, who was good friends with Stuart – please let me know.

Tim Hewlings and Bert Eccles continue discussion about Chez ‘Hade’... Next MCHS 1960s get together, at Mandarin restaurant in Toronto, is on Friday,...
Scroll to top